Marysville, CA: May 25, 2017: When the Rev. Dr. James Mariner of Trinity Anglican Church welcomed Indian human rights advocate Dr. Manisha Bangar to speak on Saturday, he admonished the congregation: “We should understand the religious persecution of any community is an important issue, and one we should not take lightly.”

Focusing on how the Hindu caste system leads to oppression of various communities in modern India, Dr. Bangar stated: “The caste system is against love. It is against fraternity. It is against every human sentiment.” Dr. Bangar, the National Vice-President of the All India Backward and Minority Communities Employees Federation (BAMCEF), was joined by Dr. Amrik Singh of the California State University Sacramento (CSUS).

Both speakers highlighted the historical roots of the present condition of India’s persecuted communities, including religious minorities like Buddhists, Christians, Muslims, Sikhs, as well as the indigenous Mulnivasi Bahujan (meaning “original people in the majority”). In 2014, a Hindu nationalist government called the Bharatiya Janata Party (BJP) took power nationally. Since then, violence against all of these oppressed communities is on the rise. 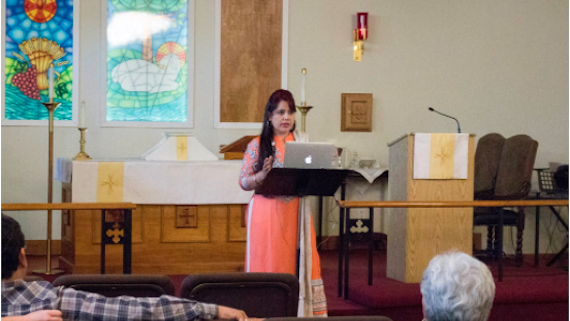 “Not only do religious minorities face discrimination in India’s universities and workforce, they also face violence as they try to fulfill their basic needs like access to food, water, and shelter,” warned Dr. Amrik Singh, who teaches Ethnic Studies at the California State University Sacramento. “We read weekly reports of Indians on the brink of starvation who are denied access to government assistance, denied access to clean sources of water, and even murdered for attempting to find sustenance by eating beef.”

Dr. Bangar identified caste practices as the primary source of deprivations of lower-class Indians. “The Caste/Varna system of Indian society is not difficult to understand as it is deliberately made out to be by academics,” she said. “It’s not complex. It’s rather simple. The results it has produced on the Indian society are so obvious and visible.”

Among those results, she explained, is a failure of the government to represent the interests of the masses despite India’s insistence that it is a democracy. “India is only in the form of a political democracy, where you get to vote,” stated Dr. Bangar. “But there is no social democracy. There is no representation, and so there is no economic democracy in the country. The upper-caste are only three percent. They have been able to bind up the majority in the fallacious and fictitious name of Hinduism — of Hindu identity. The minority Brahmans have super-power and super-control of all the institutions of the country.”

A large percentage of India’s lower-class community — which is commonly labeled “Scheduled Castes” (ex-Untouchables) — also number among the 28 million members of India’s Christian community. In addition to the ongoing struggle of caste segregation and violence, Christians in India face additional discrimination due to accusations of belonging to a “foreign” faith.” Today, five states have active “anti-conversion” laws which generally require government permission before changing faiths; several other states are considering similar laws and the BJP-controlled Union Government has threatened to pass a national law.

Trinity Anglican Church previously held a seminar about persecuted Indian minorities in October 2015. Fr. Joshua Lickter, speaking at that event, stated: “Christians have been part of Indian culture for almost two thousand years. I call upon Christians here and everywhere to stand with the Sikh community against the persecution and oppression of the Indian government.” That event was heavily attended by members of the local Sikh community, who were delighted at the opportunity to interact with Christians from throughout Northern California.

Dr. Manisha Bangar’s visit to Trinity Anglican Church was one of her last speaking engagements during a nearly month-long North American tour which included lectures at Brandeis University, UC-Davis, Ohlone College, and many other religious institutions, private residences, and community centers throughout the United States and Canada. Bhajan Singh, the Founding Director of Organization for Minorities of India (OFMI), sponsored the tour, which was also facilitated by OFMI affiliates Steve Macías, Nanak Singh, and Pieter Friedrich.