Caste Violence Against Dalits In Mirchpur Triggers Yet Another Exodus

Hisar: In yet another wave of fresh violence by the upper caste Jats against 40 Dalit residence families of the Mirchpur village has triggered another exodus of the Dalits families which the village had witnessed almost seven years ago. Around 40 families left the village today despite assurances by the district authorities of “foolproof security”. Around 100 villagers had reached Hisar town in two buses by the evening.

As in 2010, yesterday’s violence too was the fallout of a petty issue, which snowballed into a major clash that left four Dalit youths injured.

As per the available media reports the complainant Tej Bhan alleged that Shiv Kumar, a Dalit youth, had two days ago won a 1,600 metres race event, which saw participation from all castes. “Probably those beaten in the race could not digest a Dalit edging past them… a scuffle began when a group of Jat youths hurled casteist slurs at Shiv at a cycling event last night,” he said. 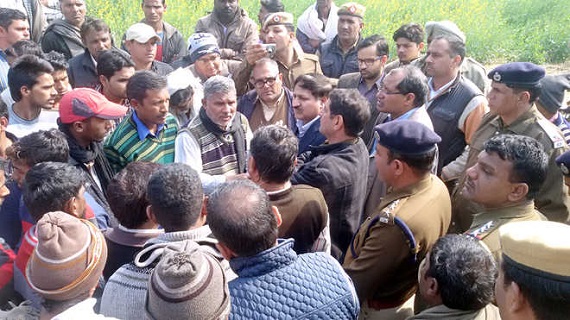 Dalit families on way to Hisar from Mirchpur on Tuesday. Photo Courtesy The Tribune

Further when Shiv Kumar objected to these casteist slurs he was attacked by around 40 persons, alleged Tej Bhan. Ajmer Kumar, a Dalit, said they would return to the village only after the government fulfilled their demands.

It was in April 2010 that two Dalits were charred to death following a fight between the two communities over the barking of a dog. A fragile truce was restored by CRPF at that time, but the force was withdrawn by the union government two months ago. The fresh violence has raised questions over the move to withdraw the security force.

But the Deputy Commissioner Nikhil Gajraj in contradiction denied it of being a caste clash, stated that among those arrested are, one each was from Brahmin and Lohar castes while the other two were Jats, said the media reports.

Sarpanch Satyawan too maintained that it was a clash between youngsters and was “unnecessarily being given a caste colour”. Superintendent of Police Rajender Kumar Meena said additional forces had been rushed to the village, and that the situation was under control.

Meanwhile, following state minister Krishan Bedi’s assurance, Dalits agreed to return to their village. Bedi assured them that the state government would consider their rehabilitation demand after the assembly poll in five states.