Sharing the horrifying experiences the minorities have undergone, he said thousands were slaughtered in 1947 during partition. Equal numbers have been victimized through proxy wars fought between these countries.

“At the time, when large section of Punjab, Kashmir and Nagaland were regretting the decision of their elders for joining India either through allurement or force or deciet, RSS thinking of reuniting Pakistan with India was nothing but living in fool’s paradise”, said he. 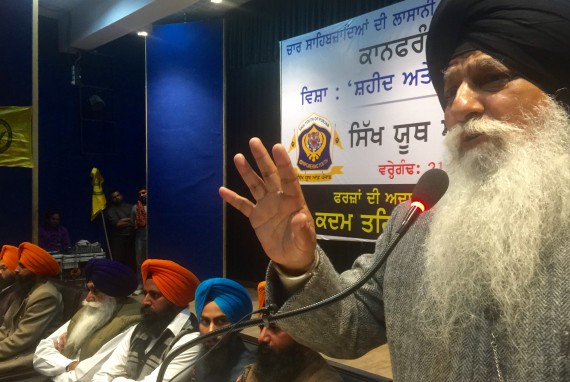 Castigating the RSS theory, he said Pakistan, Bangladesh and India were three sovereign countries and on the same lines the Kashmir and Punjab also aspire to become independent nations.

Dhami was speaking at a conference organized by its youth wing the ‘Sikh Youth of Punjab’ (SYP) on the subject ‘Martyrs and our responsibilities.

He while addressing young boys and girls said martyrs of faith can’t be forgotten. Remembering martyrs of all times, he said those were the bright pages of the Sikh history and our younger generation will definitely uphold the spirit behind them, and no generation would ever think of any compromise on those principles that remained basis for such sacrifices.

Paying glowing tributes to the martyrs, the young activists of SYP under the leadership of Paramjit Singh Tanda urged the present youth to draw inspirations from supreme sacrifices of Sahibzada’s and overcome petty temptations and fears. The speakers were of the view that it’s this spirit of martyrdom of the Gurus and their brave sons that serve as a beacon light for Sikhs to stand up to tyranny and subjugation of rulers. In all, six resolutions were adopted by the conference amidst bole so nihal.
The gathering welcomes the constitution of one man people’s commission led by former Supreme Court Justice Markenday Katju to look into Behbal Kalan police firing and unleashing of police terror on Sikh Sangat at Kotkapura on Oct 14.

Dal Khalsa spokesperson Kanwar Pal Singh deplores the sinister interference of the ruling class and bureaucracy of Punjab in the religious affairs of the Sikh religio-political functioning of Akal Takht Sahib and the SGPC.

SFHR chairman Advocate Harpal Singh Cheema who is a main player behind the setting up of Justice Katju Commission explained the reasons that prompted the human rights defenders to set-up the commission. He said since the state’s political leadership buckling under police pressure has failed to bring the erring cops to book, the justice-seekers have joined hands to discharge their responsibility.