Amrik Singh said Gurmeet Pinki had threatened him of dire consequences and told him to withdraw the writ petition filed in the Punjab and Haryana High Court.

Amrik Singh said the incident took place on September 20 last year when he was heading towards Cemetery Road in Civil Lines. Gurmeet Pinki, along with his gunmen intercepted him and told him to withdraw the writ petition.

“He said if I failed to follow his orders, he would shoot me the way he shot my son,” Amrik Singh alleged. 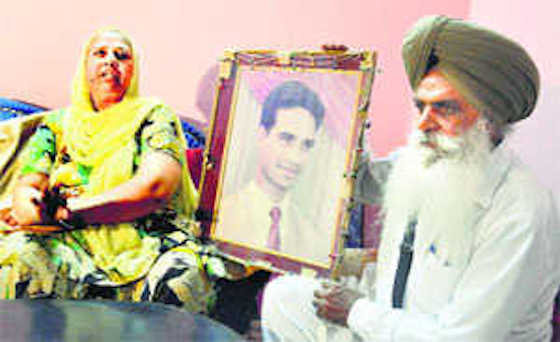 Charanjit Kaur and Amrik Singh with picture of their son Avtar Singh, who was allegedly killed by Gurmeet Pinki

He said he lodged a complaint with the Division No. 8 police. The then SHO, Gurdev Singh, had said the matter would be probed. The police record shows that the SHO had filed the matter stating that Gurmeet Pinki was not in the city on the day of the incident.

It is notable that Gurmeet Pinkey was involved in torture and killings of innocent Sikh youth, including women but he did not face any charges due to political patronage and state’s (undeclared) policy of impunity for human rights abusers in Punjab. In January 2001 Gurmeet Pinkey gunned down a Ludhaina youth named Avtar Singh Gola over a petty issue. Avtar Singh was the only son of his parents.

Gurmeet Pinkey was convicted in the murder case and sentenced to life imprisonment. However, he was released by the state government secretly on May 24, 2014. The issue of his premature release had reached the Punjab and Haryana high court.