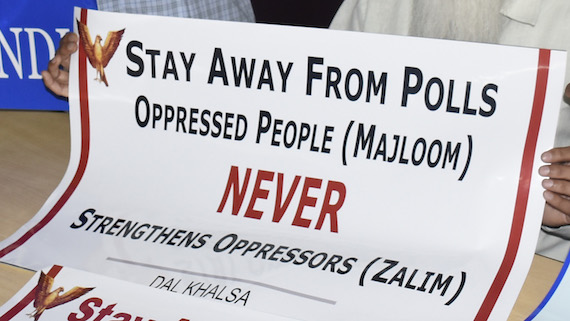 A pro-freedom Sikh group named the Dal Khalsa issued a 'policy statement' (copy available with SSN) on Indian elections today. The statement was issued in wake of Indian parliamentary elections, polling for which is due to be held in East Punjab on May 19.

Facing wrath of the Sikh sangat attempting to demolish the historic Darshani Deori of Darbar Sahib (Tarn Taran), Baba Jagtar Singh run Karsewa issued a written apology letter today. It may be recalled that on intervening night of 30 and 31 March 2019, the activists belonging to this Karsewa had started demolishing the historic Darshani Deori that was built by Kanwar Naunihal Singh, grand son of Sher-e-Punjab Maharaja Ranjeet Singh during the Khalsa Raj.

As Jagtar Singh Johal remains confined in custody of Indian police after his arrest in November 2017, an international human rights group called REDRESS has noted that his claims about custodial torture during initial days of his custody still remains unaddressed.

The officials of India and Pakistan held a meeting at Wagah-Attari crossing point between East and West Punjab. The meeting was held on East Punjab side. A joint statement was issued after the meeting.

Copy of Resolutions Adopted During Panthic Convention of January 27

A Panthic convention was called on January 27 by a five member co-ordination committee appointed by Bhai Jagtar Singh Hawara. Various Sikh activist groups participated in this convention that was held in Chandigarh.

The World Sikh Organization of Canada (WSO) has written a letter to Canada's Public Safety Minister Ralph Goodale on the maligning of the Sikh community in the recently released 2018 Public Report on the Terrorism Threat to Canada.

The State Assembly of Pennsylvania (USA) has passed a resolution recognising the fact of Sikh genocide of November 1984. The assembly has recognised the November 1984 massacre of Sikhs as 'genocide'.

The only non-SAD (Badal) member in the SGPC executive, Amrik Singh Shahpur handed over a letter to SGPC president Gobind Singh Lonogwal demanding that Jathedars should be appointed only in consultation with Panthic bodies and rules and regulations for eligibility, appointment, service and retirement and removal of Jathedars should be framed.

The two days event organised under the title of "Panthic Assembly" concluded in Amritsar today. The event took place on the lines of a 'session' of an assembly institution of parliamentary setup.

Sikh Research Institute has released it's third report in the State of the Panth series, exploring the issue of a widening disconnect between the Gurduara governance and the local sangat.

Justice Ranjit Singh Commission had submitted the first part of his final report on incidents of beadbi at village Burj Jawaharsingh Wala, Bargari, Gurusar, Mallke and incident of police firing at Kotkapura and Behbal Kalan to Punjab CM on 30 June 2018.

The report of Justice Ranjit Singh Commission into cases related to beadbi of Guru Granth Sahib at Burj Jawahar Singh Wala and Bargari villages and police firing at Kotkapura and Behbal Kalan was leaked today.