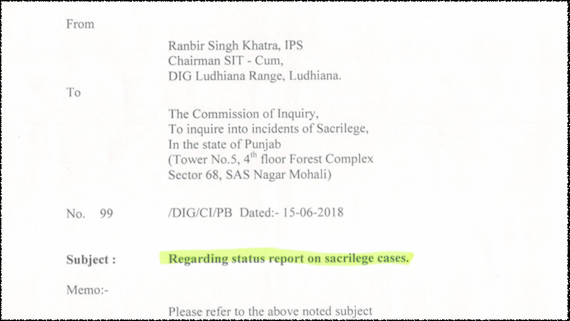 A leaked copy of status report submitted to the Punjab government by Special Investigation Team (SIT) led by DIG Ranbir Singh Khattra on SIT investigation into incidents related to Beadbi of Guru Granth Sahib confirms that Dera Sacha Sauda (Sirsa) was behind these incidents.

Punjab CM Capt. Amarinder Singh today held a meeting with a group of social media campaigners and organizers of "Black Week Against Chitta".

There is an urgent need to address past and ongoing human rights violations and abuses and deliver justice for all people in Kashmir, who for seven decades have suffered a conflict that has claimed or ruined numerous lives, a report by the UN Human Rights Office published on Thursday says.

Two hand-written pages of a letter purportedly written by Jagtar Singh Jaggi, a Scottish Sikh detailed by the police and NIA in Indian subcontinent, is released by UK based campaigners.

A shocking incident of attack on a Sikh man by a mob in Karnataka has come into light. Victim Avtar Singh, 25, works as a JCB driver with a private company in Karnataka.

GIHC co-ordinator and head of Guru Gobind Singh Department of Religious Studies, Dr. Gurmeet Singh shared the findings of the committee at Press Club in Chandigarh after submitting the report to the Office of Punjab CM.

The Sikh Federation UK has written a letter to British Prime Minister Theresa May ahead of the Indian Prime Minister Narendra Modi's visit to UK visit for Commonwealth Heads of Government Meeting (CHOGM).

The Haryana police have registered an FIR against unidentified policemen in a case related to the death of Sikh activist Gurbaksh Singh Khalsa.

The Sikh Forum President Pushpinder Singh Chopra and Secretary General Partap Singh has written a letter to the Indian PM Narendra Modi after the visit of Canadian PM Justin Trudeau.

Dal Khalsa spokesperson Kanwarpal Singh has responded to Hindustan Times (HT) resident editor Ramesh Vinayak regarding later's write-up titled: "When the President of Khalistan rustled up a quick meal for me".

The Sikh Research Institute (SikhRI) has released its second report in the State of the Panth series, inquiring into the community issues related to the ceremony of Anand Karaj.

A report (copy blow) released today by Oxfam India said 73 percent of the wealth generated last year went to the richest 1%, while 67 crore Indians who comprise the poorest half of the population saw 1% increase in their wealth.

European governments have put thousands of Afghans in harm’s way by forcibly returning them to a country where they are at serious risk of torture, kidnapping, death and other human rights abuses, Amnesty International said today in a new report.

Simmering Social Impunity: A Report by PUDR on incidents of Rajput intolerance to Dalit assertion in Saharanpur

Simmering Social Impunity: A Report by PUDR on incidents of Rajput intolerance to Dalit assertion in Saharanpur after 5th May 2017 incident.

Panch Pardhani UK, a UK based Sikh diaspora group, today released a document to explain its vision regarding Sikh diaspora activism at present juncture of the Sikh struggle for freedom.

Civil liberties and Democratic Rights organizations have for long argued that using Indian Army to prosecute war against our own people is to fight an ignoble war,

Sikh leader Bhai Daljeet Singh Bittu had released a ‘position document’ on 6 June, 2015 at Amritsar. This document presents a review of previous phases of Sikh struggle for freedom and sets the ground for discussion on our future course of action.

In its clear cut response to The Tribune's piece of advice that it's a time for closure of 1984, Dal Khalsa has stated that without pinning the perpetrators down there will be no closure.

Aam Aadmi Party(AAP) today released the report of Zora Singh Commission set up to investigate the killing of two persons in police firing on peaceful Sikhs protesting against beadbi of Guru Granth Sahib at Behbal Kalan in Faridkot district on October 14.