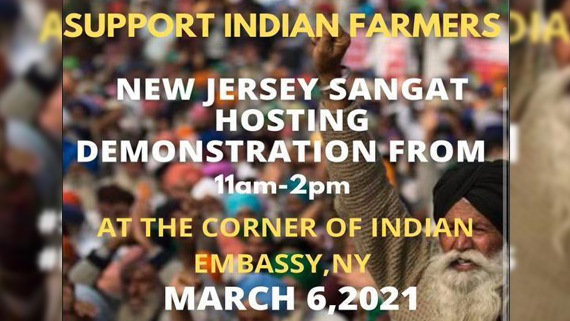 Labour Activist Nodeep Kaur was released from Sonipat jail on Friday after she was granted bail by the Punjab and Haryana High Court earlier in the day.

India: Authorities Must Stop Suppressing Peaceful Protests by Farmers and Their Allies

Since early February 2021, police have used metal barricades, cement walls and iron nails to block the roads leading to Tikri, Singhu, Ghazipur, the three main borders where the farmers have assembled. They have done so to prevent any vehicles from these areas entering Delhi. The barricades have also served to deny male and female farmers and their families, including children, consistent access to water and sanitation facilities. The protests at these sites over the past two months are reported to have been peaceful.

The Indian government must immediately stop its escalating crackdown on protesters, farming leaders and journalists, amid ongoing nationwide demonstrations against three recently introduced farm laws, Amnesty International said today. The organization also called for the immediate and unconditional release of those arrested solely for peacefully exercising their rights to freedom of expression and peaceful assembly.

Responding to the call given by 40 farmers organizations asking the people to celebrate new year with the protesting farmers, the Dal Khalsa urged the masses to join farmers sitting at Singhu, Tikri and other borders of Delhi on 31st Dec to mark the beginning of 2021 and pray for the success of farmers cause.

Taking a dig at present incumbent of the Akal Takhat for belittling his august post, the Dal Khalsa said it was painful to note at a function held to mark 100 years of the SGPC that the political authority of the Sikhs was holding the religious authority to ransom.

Rally on Punjab Day to Highlight the Treatment of Punjab as a Colony by India: Dal Khalsa

The Dal Khalsa has decided to organize a rally and march in Amritsar on Punjab Day to highlight how New Delhi through black laws is treating Punjab as its colony, encroaching on state's rights, ruining youth’s lives, looting states river waters in violation of riparian principles beside farmers distress.

As per media reports, two armed men shot dead Balwinder Singh Bhikhiwind on Friday. Balwinder, 62, who had Leftist leanings, was instrumental to Indian state against Sikh militants during 1980s-90s. He had taken arms from the Indian state and had even erected bunkers on the roof of his house.

On September 9, 2020 Canada based Macdonald-Laurier Institute released a paper titled "Khalistan: A Project of Pakistan" by Terry Milewski. BC Gurdwaras Council and Ontario Gurdwaras Committee has issued a statement in response to this paper, terming it as part of Indian state's propaganda against the Sikh Sangarsh.

The Delhi police personnel were complicit and an active participant in the violence that took place in Delhi in February 2020, yet in the last six months not a single investigation has been opened into the human rights violations committed by the Delhi police - before, during and after the violence, said Amnesty International India on Friday (August 28) as it released a new investigative briefing.

Foreign Ministers of China and India had a telephonic conversation on Wednesday (June 17) in wake of Monday (June 15)’s incident in which 20 Indian soldiers, including a commanding officer, were killed. Media reports say that there were casualties on Chinese side also but China did not release any information in this regard.

Government of India (GoI)'s Union Ministry of Home Affairs (MHA) issued new guidelines to fight COVID-19 and for phased re-opening of areas outside the Containment Zones, yesterday (May 30).

In a press release issued today, the Punjab government said that it has collected more than Rs. 1 Crore as fines from people who were not wearing masks that have been made mandatory by the government in wake of COVID-19.

Four of the five cops, booked by the Sangrur and Barnala police involving use of arms, including an AK-47 rifle, by singer Sidhu Moosewala have now applied for anticipatory bail before a Sangrur court. Meanwhile Sidhu Moosewala still remains on the run.

Sidhu Moosewala was booked in two cases for firing at a police at two different places earlier this month. He was accompanied by Punjab police officials who had unauthorisedly arranged shooting practise for him.