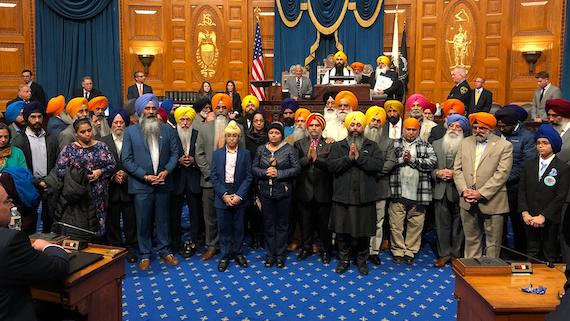 The Massachusetts State Assembly introduced a bill recognizing Nov 12th, 2019, as “World Equality Day” in remembrance of the 550th Parkash Gurpurab of Sri Guru Nanak Saheb- the first Sikh Guru and founder of the Sikh faith.

An Indian couple accused of spying on Sikh and Kashmiri communities in Germany went on trial on Thursday on charges that carry a sentence of up to 10 years in prison.

The 550th Parkash Gurpurab of Guru Nanak Ji was marked with great accolade at City Hall overlooking the spectacular London skyline during the evening of Tuesday 19th November 2019.

Global Sikh Council (GSC) has expressed outrage at the judgement of the Indian Supreme Court issued on 10 November 2019. GSC says that the SCI judgement in some parts is seriously flawed, historically inaccurate and totally wrong on Sikh religion.

This week we have seen the Sikh Federation (UK) with the support of over 150 Gurdwaras and Sikh organisations challenge the Cabinet Office and Office for National Statistics (ONS) in the High Court.

The Ontario Gurdwaras Committee (OGC) and Ontario Sikh and Gurudwara Council (OSGC) collectively commemorated the victims of the 1984 Sikh Genocide at Queen’s Park on November 7.

The Ontario Gurdwaras Committee (OGC) is hosting a series of lectures of different scholars and orators to mark the 550th Parkash Gurpurab of Guru Nanak Ji. In this series the OGC has announced to host lectures of Sikh political analyst and author Bhai Ajmer Singh and researcher Dr. Jasjir Singh for two days.

“We should use this moment when the world is paying attention to India,” said Sunita Viswanath as she joined a panel of academics, attorneys, and activists at a US capitol briefing on the delay and denial of justice for state-sponsored massacres of Indian minorities.

In a statement issued on November 3, 2019 REDRESS said that India continues to ignore its binding international obligations to investigate the allegations of torture in Jagtar Singh-Johal’s case. Monday 4 November 2019 marked two years since his arrest in India. New expert analysis has added further support to Jagtar Singh Johal’s claims of torture.

In his famous thesis regarding ‘stages of genocide’ US based scholar Gregory H. Stanton has identified ‘denial’ as last and unending stage of genocide. He says that every genocide is followed by denial. He further points out that denial tactics may be numerous.

A joint delegation of Hindu and Muslim organizational leaders met with US Congressman Ro Khanna on October 21 to thank him for his recent statement rejecting the political ideology of Hindutva.

The World Sikh Organization of Canada offers congratulations to Prime Minister Justin Trudeau on being re-elected in Canada's 43rd general election. The Liberal Party of Canada will return to Parliament Hill with a minority government.

Heading into the 2019 election campaign, it seemed like the New Democrats couldn't catch a break. The party was struggling to raise funds and recruit candidates and was polling badly. Some speculated that the NDP might lose official party status.

This year marks the 550th Parkash Gurpurab of Guru Nanak Ji. To mark this momentous occasion, the Ontario Gurdwaras Committee (OGC) is hosting engaging events and activities across the province, in addition to the Gurpurab celebrations being held at Gurdwaras.

People from all walks of life packed the Los Cerritos Community Centre in Fremont, CA on October 12 for the launch of the Tamil translation of Captivating the Simple-Hearted: A Struggle for Human Dignity in the Indian Subcontinent.