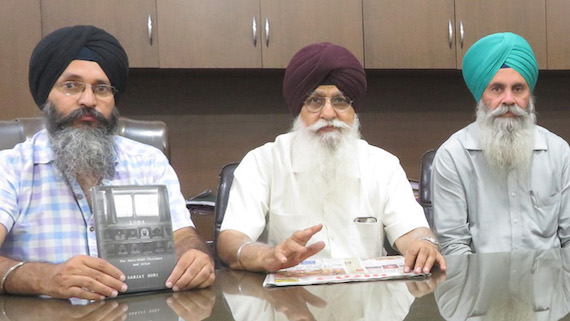 The Dal Khalsa with the active support of like-minded groups will hold convention on Nov 5 at Chandigarh to mark 35th year of 1984 Sikh genocide.

In more than last three decades, on every anniversary of the 1984 massacre of Sikhs, this author has been reminding [that] how Indian State and judiciary did not bother to punish the perpetrators of this horrendous mass killing of the innocents of the second largest religious minority of [India].

Sikh Community of Connecticut along with City and State officials will be unveiling “1984 Sikh Genocide Memorial” which has been placed in Otis Library located at 261 Main St, Norwich CT 06360 on June 1st 2019 at 1:00pm.

The Dal Khalsa yesterday hit out at Congress and BJP-SAD (Badal) for playing "dirty politics over the deaths during Nov 1984 Sikh genocide". The organization is of the view that both the mainstream parties of India have stains of innocent blood on their sleeves.

Indian Supreme Court today set aside conviction of 15 men held guilty of "rioting and arson" in a connection with genocidal massacre of Sikhs in East Delhi’s Trilokpuri in November 1984.

The Supreme Court of India (SCI) on Monday (April 8) sought the status from Central Bureau of Investigation (CBI) on the ongoing trail of Sajjan Kumar in 1984 Sikh genocide related cases.

SGPC on Saturday felicitated witnesses of 1984 Sikh genocide cases and the lawyers who fought the cases of the genocide to ensure conviction of Sajjan Kumar, at its headquarters, Teja Singh Samundari Hall, here in presence of the Shiromani Akali Dal (Badal) president Sukhbir Singh Badal.

OP-ED: The Illusion of Justice

The recent life sentencing of Sajjan Kumar in a 1984 genocide case is being hailed as a landmark judgement by the Indian State’s various institutions vis-a-viz Media, Judiciary & Political parties.

Sikh genocide 1984 convict Sajjan Kumar will be kept away from Sikh inmates in Mandoli Jail complex. The jail authorities say that it was a precautionary measure to prevent any possible attack on Indian politician who had led genocidal massacre of Sikhs in Delhi in November 1984.

As per media report convicted Indian politician Sajjan Kumar is expected to surrender before a Delhi court on December 31 to serve the life imprisonment awarded to him by Delhi High Court in a 1984 Sikh genocide related case.

What distinguishes the learned judgment delivered by Justices S Muralidhar and Vinod Goel is not just the meticulous finding of criminality and award of punishment in the Sajjan Kumar case but the urging that “Neither ‘crimes against humanity’ nor ‘genocide’ is part of our domestic law of crime.

For past three decades the 1984 Sikh genocide was labeled as "riots" by the Indian state, more specifically the government, judiciary and the media propagated that the 1984 killings of Sikhs were "riots".