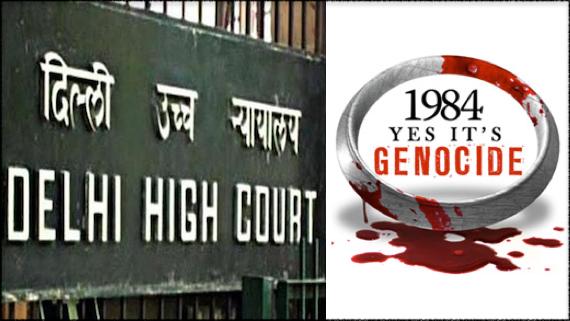 For past three decades the 1984 Sikh genocide was labeled as "riots" by the Indian state, more specifically the government, judiciary and the media propagated that the 1984 killings of Sikhs were "riots".

The High Court pronounced Sajjan Kumar guilty for instigating massacre of Sikhs during November 1984 Sikh Genocide and sentenced him to imprisonment for life.

The global Sikh community has expressed outrage of selection of Kalam Nath as Chief Minister of Madhya Pradesh (MP) State of the Indian subcontinent by the Indian National Congress (INC). Kalam Nath faces allegations of instigating genocidal violence against the Sikhs during November 1984.

In another setback to Indian state's denial tactics to deny the fact of 1984 Sikh genocide, a judgement of the Delhi High Court, delivered recently, clearly uses the term 'genocide' while referring to the events related to 1984 Sikh genocide.

The History of Genocidal Politics in the World and Indian Subcontinent: Dr. Garga Chatterjee

Speaking during aa Seminar on "Phenomena of Genocide" at Panjab University Chandigarh on November 15, 2018 Dr. Garga Chatterjee shared his views on the topic of “History Of Genocidal Politics In Sub Continent and the World’’.

This is full video recording of speech of Sikh Siyasat Editor Parmjeet Singh on Ghallughara, Genocide, Stages of Genocide and 1984 Sikh Genocide. This speech was delivered at Punjab University Chandigarh on November 15, 2018

Genocides in the Modern Era – A Sign of Historical Crisis: Speech of Bhai Ajmer Singh

Bhai Ajmer Singh begun his talk by describing western model of “State” which he said is failing everywhere and lead to such destructive things like genocides and weapons of mass destruction.

Sath, a students’ group, organized a seminar on “Phenomenon of Genocide in Modern Era” at Zoology Auditorium in Punjab University campus in Chandigarh on 15 November 2018. The seminar was held in the memory of those victimized during the 1984 Sikh Genocide. In this seminar Dr Garga Chatterjee (Indian Statistical Institute), Sikh author Bhai Ajmer Singh and Parmjeet Singh (Editor, Sikh Siyasat News) presented their papers and shared their views.

Today's newspapers in the Indian subcontinent prominent published a fake news that the 1984 Sikh genocide resolution passed by the Pennsylvania General Assembly in United States of America is withdrawn. The fake is also published in various online media platforms.

Two persons were convicted yesterday (on Nov. 14) by a Patiala House trial court in Delhi in a case related to genocidal violence against the Sikhs in November 1984.

Sath, a students group, is going to organize a seminar on "Phenomena of Genocide" in Punjab University Chandigarh on 15th of November. The seminar will be held in Zoology Auditorium at 3 PM.

In first of its kind the General Assembly of State of Connecticut in USA along with a US Senator and eight cities of Connecticut recognised November 1 as the Sikh Genocide Remembrance Day.

This week, Gurratan Singh, Member of Provincial Parliament from Brampton East, rose in the Legislative Assembly of Ontario to remember the 1984 Sikh genocide.

Terming the November 1984 massacre a watershed in Indo-Sikh relations, the Dal Khalsa said this November marks the year when Sikhs will actively pursue the UN and world power, who have remained oblivious to Sikh yearning for justice and under Indian pressure ignored to admonish India for the Delhi carnage.

From November 1st to 4th, Canadians and Human Rights Advocates will mark the 34th anniversary of the 1984 Sikh Genocide.

New Delhi: A US Diplomatic cable published by Public Library of US Diplomacy (PLUS D), commonly known as Wikileaks, contains a number of political highlights ...

On the 34th anniversary of the genocide of the Sikhs in India during the first week of November 1984, a delegation from the recently formed World Sikh Parliament (WSP) met with a senior UN human rights official in Geneva to urge action by the world body to deal with the range of key human rights concerns that define the decades-old conflict between the Sikh nation and the Indian state, reads a release issued by an official of the World Sikh Parliament.