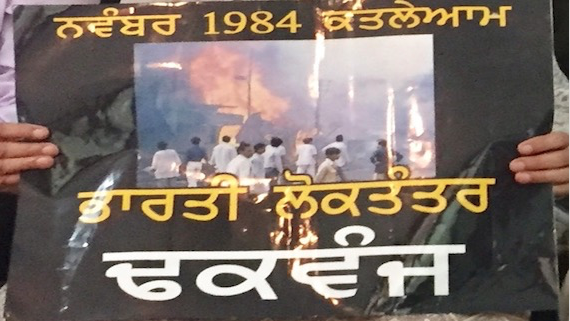 Observing the 34th genocidal day of Nov 1984 killings, the Dal Khalsa will hold a 'Mashaal (Torch) March' at Amritsar on Nov 3.

Micro blogging giant Twitter is blocking tweets with links of www.1984sikhgenocide.org website. The website is launched by a human rights and advocacy group called Sikhs For Justice (SFJ) for triggering a campaign to get international recognition for the fact of 'Sikh Genocide' of 1984.

The State Assembly of Pennsylvania (USA) has passed a resolution recognising the fact of Sikh genocide of November 1984. The assembly has recognised the November 1984 massacre of Sikhs as 'genocide'.

The “Wall of Truth” – the memorial having names of victims of the massacre of Sikhs in November 1984 – at Gurudwara Rakab Ganj near Indian Parliament will now become a memorial for all the Sikhs killed in hate crimes across the globe.

On Sunday 3 June tens of thousands of Sikhs will gather in central London and remember victims of the 1984 Sikh Genocide.

More than three decades have passed since thousands of Sikhs were brutally killed throughout Indian sub-continent in November 1984 genocidal violence against the Sikhs. The impunity granted to the culprits of this state-sponsored genocide is an established fact now.

During the first day of the three-days proceedings at the First-tier tribunal, it seemed that the United Kingdom was trying tooth and nail to suppress and protect the documents

In what can be called as mockery of the art of criminal investigation, the Central Bureau of Investigation (CBI) after three decades on Tuesday told a city court

A three member delegation of the All India Sikh Student Federation (AISSF) on Monday submitted a memorandum to the Canadian counsel Mr Yohan Rodriguez,

A Delhi court on Thursday (February 15) directed the CBI to probe two CDs submitted by DSGMC in a case related to 1984 violence against the Sikhs in which Congress leader Jagdish Tytler was given clean chit for his alleged role.

Calling it a state-sponsored genocide of Sikhs, the Dal Khalsa claimed that the Nov 1984 killings started after Rajiv Gandhi was sworn-in as Prime Minister of India on 31st Oct