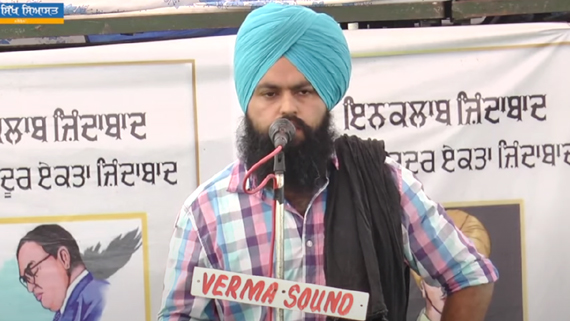 This is video recording of speech of youth leader Pardeep Singh at #ShambhuMorcha on 13 October 2020.

Punjab’s farmers have been protesting against new agricultural laws enacted by the Government of India (GoI). Other sections of the Punjabi society, especially the ...

Bir Singh is a Punjabi lyricist. Joining the Shambhu Morcha on October 4, 2020 as a part of ongoing peaceful farmers struggle Bir Singh shared his poem/song with the audience in his own voice.

Past, Present & Future of Farmers Struggle in Punjab: Speech of Bhai Mandhir Singh at Shambu Morcha

New Agriculture Laws have trigger uprising in #FarmersProtest in #Punjab. #Farmers #Youth and other sections of society are out on streets. On 4 October 2020 #Shambhu #Morcha was announced as part of struggle against centralisation

Farmers in Punjab have been protesting against three agriculture ordinances promulgated by Narendra Modi led Union Government in India. Protests have intensified after the Union Government proceeded forward with its plan to convert these ordinances into permanent laws.

Sikh Siyasat editor Parmjeet Singh presented discussed the defining characteristics of the Delhi Takht and prevalent visions amongst the resistance movements, while stressing that at this juncture the struggling peoples of the Indian Region need to unite for dismantling the current structure of Delhi Takhat.

Issue of Sri Guru Granth Sahib Ji’s Saroop – Who Are The Real Culprits?

The Shiromani Gurdwara Prabhandak Committee is trying to underplay the issue of missing Saroops of Guru Granth Sahib Ji. It is trying to project an issue related to beadbi of Guru Sahib as an issue of corruption.

How India Subverted Its Own Constitution and Law to Loot Punjab’s River Water?

On 6 June 2020, Samvad released a draft to trigger debate on determining the future course of Sikh struggle as per the Panthic tradition and principles. In order to explain this document and facilitate debate on it, Samvad is holding a series of of discussions. As a part of this discussion, Prabhjot Singh shares his views on Guru Khalsa Panth's Claim of Patshahi (Sovereignty) and Western Secular Philosophy.

On 6 June 2020, Samvad released a draft to trigger debate on determining the future course of Sikh struggle as per the Panthic tradition and principles. In order to explain this document and facilitate debate on it, Samvad is holding a series of of discussions. As a part of this series, second discussion was held on "Western Secular Philosophy" on August 16.

Samvad, a discussion forum, has released a draft to trigger debate on determining the future course of Sikh struggle as per the Panthic tradition and principles. The document was released on 6 June, 2020 at Takht Kesgarh Sahib, Sri Anandpur Sahib.

Pilibhit fake encounter case was one of the rarest cases that stood on trial for over two decades till final hearing, conviction and sentencing of the culprits. This short documentary tells the story of struggle of victim families against tyranny for 25 years.

Illegal land mining is rampant in various villages of Mukerian Tehsil of Hoshiarpur District in Punjab. These activities are posing threat to farmers, agriculture, geology and environment.

China and India are two key players in South-Asian Geopolitics. The militaries of both powers were engaged in a standoff in Eastern Ladakh recently. Though both sides jointly declared to disengage and deescalate in mid-July, there has been little progress in deescalation along the disputed Line of Actual Control.

Misuse of UAPA and tactics of NIA are under question after witness interrogated by NIA dies mysteriously. A case registered by the Punjab police in 2018 at Sultanwind (Amritsar) police station was suddenly transferred to NIA. NIA called a Sikh youth named Lovepreet Singh for questioning as a witness. After meeting NIA officials on 13 July 2020,

Dera Sauda Sirsa came in clash with the Sikhs in 2007 when Dera chief Gurmeet Ram Rahim attempted to personify himself as Tenth Sikh Guru, Sri Guru Gobind Singh Ji and staged a darama of Amrit Sanskar. Personification of Sikh Guru or staging drama of Amrit Sanskar is strictly prohibited in the Sikh tradition.