China India Face-off in Galwan (Ladakh): How It Could Impact South Asia, Punjab and the Sikhs? 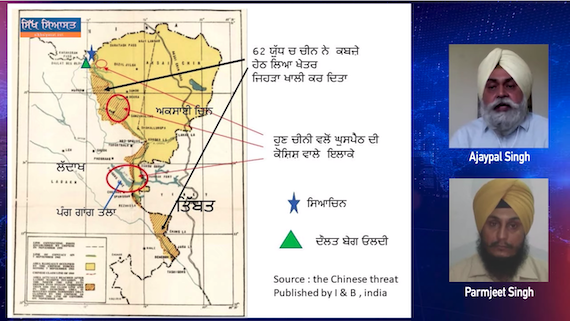 China and India has been engaged in a face-off in Galwan valley of Ladakh region. A clash broke out between Chinese and Indian soldiers on intervening night of 15 and 16 June which resulted in deaths of 20 Indian army personnel, including a commanding officer.

In the wake of Monday night’s incident in which one officer and two soldiers of Indian Army were killed in a fight with Chinese military, Major Generals of China and India are talking to defuse the situation in the Galwan Valley, Ladakh and other areas.

An Indian Army officer and two soldiers were reportedly killed in Ladakh's Galwan Valley on Monday night during violent face off with Chinese military, according to Indian media reports.

Chandigarh: Amid heightened tensions between China and India in wake of recent standoff between in Ladakh, Chinese daily the Global Times has criticised and Condemned ...

India-Nepal relationship is moving fast towards the edge. It all started with Nepal releasing a new political map of the country which included certain areas as parts of Nepal which are also claimed by India. Last week a bill was moved in Nepal’s parliament to amend the constitution of Nepal in accordance with the new political map. The bill is unanimously passed by the lower house of Nepal parliament.

Australia and India Sign Use of Military Bases & Logistic Support Deal; What’s Next?

India and Australia have signed a pact on access to military bases for logistics support. The pact was one of the seven agreements singed after a virtual summit between Indian PM Narendra Modi and his Australian counterpart Scott Morrison.

Chinese and Indian soldiers were engaged in a standoff in several areas along the Line of Actual Control (LAC) in Ladakh region for close to a month now. While China has been in aggressive mood, India is playing defensive.

The Government of India (GoI) has been under pressure because of China's aggressive mode in Ladakh. If media reports are to be believed Chinese soldiers have advanced into the territory which India claims as part of region under its control. The issue has been in discussion for about a month now but there was no official response from any senior member of the government of India so far.

China on Friday (May 29) rejected US President Donald Trump's offer to mediate between India and China to end their current border standoff, saying the two countries do not need the intervention of a "third party" to settle their differences.

Chinese President Xi Jinping on Tuesday stressed achieving the targets and missions of strengthening the national defense and armed forces for 2020, while maintaining effective epidemic control on a regular basis, according to Chinese Official media Global Times.

Escalation of border dispute between China and India in Ladakh is on the rise since past few weeks. Chinese and Indian troops have been engaged in aggressive posturing at Pangong Tso lake, Galwan Valley, Demchok and Daulat Beg Oldi for the past three weeks.

United Nations Under Secretary General (USG) Adama Dieng who is also the UN Special Adviser on the Prevention of Genocide has expressed his concerns over discrimination against minorities in India since the adoption of the Citizenship Amendment Act (CAA).

We condemn the brutal crackdown on dissent and protest which has accompanied India’s Covid-19 lockdown. The Modi government has launched a witch-hunt of students and activists and is charging them under the draconian Unlawful Activities (Prevention) Act (UAPA).

Chandigarh: Border tensions between China and India have flared up once again with at least two incidents of violent clashes and stone-pelting taking place between ...

As per reports, another Indian will stand trial in Germany accused of spying on Sikh and Kashmiri communities for New Delhi's secret service.

After the attacks on March 25, 2020, in the Gurdwara Guru Har Rai Sahib Ji in Kabul, the Sikh Diaspora moved swiftly to condemn the persons and groups responsible.