Jalandhar: Taking exception over the CBI closure report and the shared stand by Shiromani Akali Dal (Badal) president Sukhbir Singh Badal in the Bargari beadbi case, the Dal Khalsa said it looks both (CBI and Sukhbir Singh Badal) have same interests to help Dera Sauda Sirsa to come clean out of the sin of beadbi.

The organization today categorically demanded that the Punjab Govt should hand over the probe of sacrilege to the SIT headed by Kunwar Vijay Partap Singh, which is already probing the firing incidents of Behbal Kalan and Kotkapura. 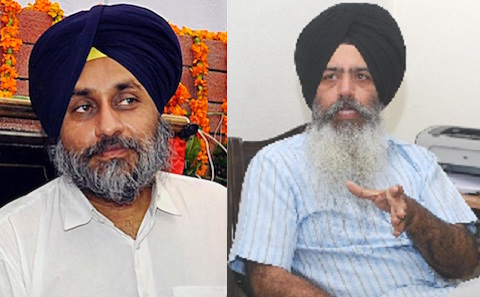 As beadbi and shootout incidents were interlinked, the probe should be given to the same SIT, said party spokesman Kanwar Pal Singh. Moreover, the CBI has washed its hands from the case, he added.

Referring to Sukhbir Singh Badal’s statement that the CBI’s closure report had belied the investigation conducted by the SIT, he said Sukhbir Badal has conspicuously ignored the fact that the SIT constituted by his own govt under DIG RS Kattra to probe sacrilege case has indicted the Dera Sirsa for the crime.

Dal Khalsa statement took a dig at CBI’s closure report in which the agency has given clean chit to dera sirsa and subsequently Sukhbir endorsing the report. “CBI has indirectly helped Sukhbir and in turn the latter has patted CBI’s back”.

He slammed the Amarinder Singh led govt for creating a mess and making things more complicated. He blamed both previous and present governments for making mockery of justice. “First SIT was formed during Badal regime under IPS Sahota, which turned out to be a damp squib. Second was constituted again by Badals under DIG Khattra, to whose findings Sukhbir Singh Badal himself has downplayed by lending credence to CBI’s version.

He said in public perception Badals led Dal is called as “Behadbi Dal”, which was making Sukhbir and his coterie frustrated and out-of-mind.