New Delhi, India: BJP led government in the Centre has come out with full support for Delhi L-G Najeeb Jung. The Centre’s notification clarifying the Delhi lieutenant governor’s powers effectively emasculates the AAP government that has been asserting its powers even on subjects such as public order and police that are exclusively for the L-G under the Constitution.

The May 21 gazette notification — that supersedes an earlier notification dated September 24, 1998 — is likely to worsen the ongoing power tussle between L-G Najeeb Jung and chief minister Kejriwal.

The 1998 notification authorised the L-G to exercise his powers on matters related to public order, police and services in consultation with the CM. In case he didn’t consult the CM, he had to record reasons in writing on why he did not consider it expedient to do so. 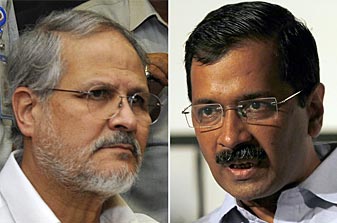 “The L-G, shall in matters connected with public order, police and services exercise the power and discharge the functions of the Centre, to the extent delegated from time to time to him by the President, in consultation with the CM, except in cases where, for reasons to be recorded in writing he does not consider it expedient to do so,” the 1998 notification read.

But Thursday’s notification that draws strength from Article 239AA gives the L-G a complete free hand as far as the reserved subjects of public order, police and services are concerned. It does not talk about any consultation whatsoever with the CM.

The latest notification leaves it to the L-G’s discretion “to obtain the views” of the CM in regard to the matter of “services” wherever he considered it to be appropriate.

“The 1998 notification was not completely in consonance with constitutional provisions. The latest notification clarifies the correct constitutional position and ends the confusion on the powers of the L-G and the NCT government,” attorney general Mukul Rohatgi reportedly told Hindustan Times (HT).

Further, the notification clarified that the Anti-Corruption Branch, which had been working under the Delhi government, can’t take any cognisance of offences against officials, employees and functionaries of these central government services.

“If police is a subject which is with the LG under the constitution, how can ACB as a police station be with the NCT government?” Rohatgi asked.

This effectively puts an end to situations like the one created by the filing of FIR by the ACB during the 49-day stint of AAP in 2014 against then union minister for petroleum M Veerappa and Reliance India Ltd chief Mukesh Ambani for alleged graft in gas pricing.