Chandigarh: As per the media reports the  chairman of the pro-freedom faction of National Socialist Council of Nagalim NSCN (K) Shangwang Shangyung Khaplang, who was know for his no compromise stand,  passed away at a hospital in the insurgent group’s military base at Takka, in Myanmar’s Kachin state on Friday.

While referring to the government sources media reports said that the ailing leader had died of diabetes-related complications. The long-ailing  leader’s death could pave the way for the second-rung leaders within the group who hope to strike separate peace deals (appeasements) with the governments of India and Myanmar.

Even as members of the rival Thuingaleng Muivah-led NSCN is engaged in talks with New Delhi, Khaplang’s forces have continued to wage war with Indian troops. Earlier this week, a clash at Tijit, near Lappa in Mon district in Nagaland, claimed the lives of Indian Army officer Major David Manlum, and three NSCN-Khaplang insurgents. 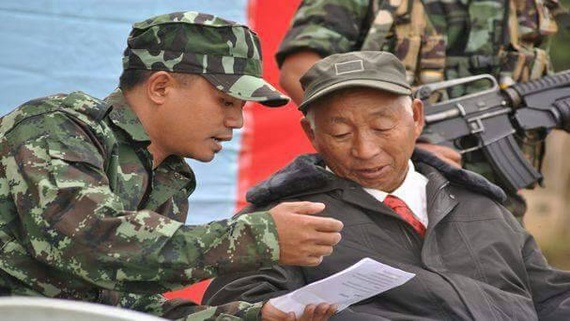 In 2016, the NSCN-Khaplang’s killing of 20 Indian Army soldiers in an ambush in Manipur sparked off a supposed cross-border raid into Myanmar, targeting the group’s infrastructure. The results of the raid remain disputed, however, with critics charging it did little to deter.

Hailing from the Hemi Naga tribe, which predominantly lives in Myanmar, Khaplang formed the Naga Defence Force in 1964, the leading eastern voice of a new nationalist movement that sought to carve a new nation out of both India and Myanmar, said media sources.

He went He went on to become chairman of Eastern Naga Revolutionary Council, which helped the cadre of Angami Zapu Phizo’s Naga National Council travel to China for training.

It was during this time that he joint forces with the then fellow prominent leaders of Naga freedom movement Thuingaleng Muivah and Isak Chishi Swu — all three of whom revolted against Phizo when his forces signed the Shillong Accord of November 1975, under which NNC accepted the supremacy of the Indian Constitution.

For a brief period the NSCN remained a forefront organisation representing the Naga movemnet but soon it split in 1988, following an abortive assassination attempt targeting Muivah, Khaplang drove the Indian Naga cadre out of Myanmar — mainly from the Konyak and Tangkhul tribes — and forced his rivals to shift base to Thailand, reports Indian Express (IE).

From 2001, the NSCN-Khaplang entered into a ceasefire agreement with the Indian government as its rival faction had done four years earlier. It could not be invited to peace talks, however, since Khaplang was a Myanmar national — provoking him to walk out of the ceasefire in 2015.

Earlier this year, New Delhi faced considerable diplomatic embarrassment when photographs surfaced of its ambassador to Myanmar, Vikram Misri, and European Union envoy Roland Kobia, standing next to NSCN-Khalplang military chief Niki Sumi as Niki Sumi is alleged by India’s National Investigation Agency (NIA) for carring out an ambush in 2015 in which 20 soldiers of Indian Army were killed, NIA has declared a bounty of Rs 10 lakhs on his head.

“Khaplang had rejected joining ongoing peace talks aimed at assimilating ethnic militias into the Myanmar political order, holding out for a Nagalim that would cut across both India and Myanmar,” says a senior Indian government official. “The hope now is that realists will be able to push forward”, reads a quote from a report published in An English vernacular.

Negotiations with the rival NSCN faction have continued uninterrupted despite the death of Isak Chishi Swu last summer, the official said while talking to the media, and have reached a stage where granular details of constitutional arrangements are now being discussed.

“The broad idea is to give Naga communities living outside the state a high degree of autonomy, without changing the territorial boundaries of existing states”, he adds.