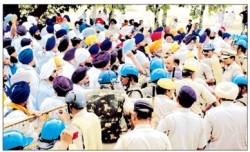 Supporters of the Haryana Sikh Gurdwaras Management Committee (HSGMC) while raising the jaikara/ slogans of “Bole So Nihal…Sat Shri Akal” tried to break the barricades placed by the police outside the Gurdwara Sahib. The HSGPC men reportedly succeeded in their bid.

The police reported to canes to disperse the Sikh Sangat. However, police succeeded in keeping the Sikh Sangat away from the Gurdwara but HSGPC reportedly accompanied by five to six hundred supporters refused to leave the place. 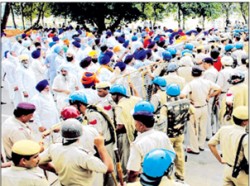 At the time of writing of the news, the supporters and leaders of HSGPC were still there outside the Gurdwara Sahib and more Sikhs from across the state were joining them.

One of the main leaders of HSGMC Jasvir Singh Khalsa while talking to Sikh Siyasat News (SSN) over phone confirmed that the HSGMC had been trying to take over the charge of Gurdwara Patshahi Chhevin.

“We will take over the Gurdwara tonight and will not vacate the place until the service of the Gurdwara is taken over by Haryana Sikhs. More than 600 Sikhs are camping outside the Gurdwara and we are sure to get it vacated by SGPC tonight”, told Khalsa.

“We are ready to face any situation to free Gurdwaras from control of SGPC”, he added.

Situation was reportedly tense, but under control of administration, at Gurdwara Chhevin Patshahi Kurukshetra and there are chances of clash as a number of SGPC task force men have been occupying Gurdwara Sahibs.