Chandigarh: A two day seminar on “Nationalism and Culture: A Discussion” organised by Progressive Writers Association concluded here at Punjab Kala Bhawan, Sector 16. As per media reports, the writers who took part in the seminar resolved to launch a cultural struggle to challenge fascist forces.

Prof. Sukhdev Singh, one of the main organisers of the seminar, said that more than two hundred and fifty writers and authors from 22 states of the Indian subcontinent took part in this seminar that was held on October 28 and 29.

On the final day of the seminar the writers passed a resolution to take cultural resistance to the streets. In the resolution, it was claimed that after the formation of the BJP government at the Centre, violence in the name of religion and caste had increased manifold, so it was time to launch a struggle against the ongoing oppression. 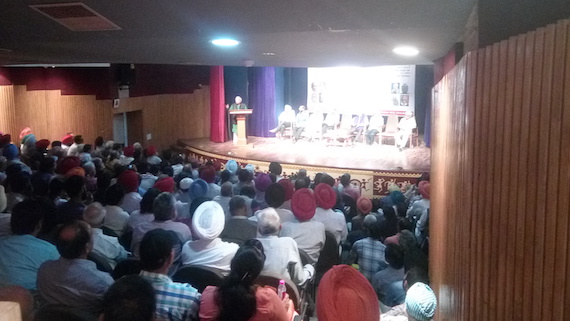 The resolution, ‘Chandigarh Declaration’, was passed by scholars from 20 states. With the recent murder of Gauri Lankesh and other scholars, rationalists and writers over the past three years, communal forces had tried to convey that any dissent would not be tolerated, they opined.

Earlier, writers claimed that the electronic media was in league with the establishment and there was a fast slant coming in the mainstream print media as well.

“A cultural revolution is needed for Hindutva is targeting our culture, secularism and unity in the name of nationalism. The freedom of our writers is in danger, they are being targeted and we need to talk about these issues, for it’s only through dialogue, conversations and coming together that we can dispel darkness. People have the power to change the world, and seminars such as this is a resolve towards solutions and transformations. People are being filled with hatred and a cultural revolution is needed. Writers must be social activists and stand by the marginalised,” said Rajendra Rajan.

Ira Bhaskar, professor of cinema studies at Jawaharlal Nehru University (JNU), alleged that the establishment always tried to control the cinema through various bodies, such as the censor board, for its vested interests. She claimed that the autonomy of such institutions was at stake.

“The questions are why do the politicians want to control culture, cinema, they exert pressure on the functioning of an autonomous body like CBFC. Sadly except the print media, there are very few voices and we want to explore the role of film in today’s field”, she added.

Sarita Srivastava, a writer from Indore, raised questions about writings of woman, their status and how the reach of literature needs to be increased, for writers cannot be in their limited spaces and creative zones and in these times of unrest, doubt, discrimination, writers have to protest with people, build connections with the common people, their issues, problems and take the role of activists, and with that will emerge a collective voice.

“And why make men and women competitors, why can’t we walk together and work towards a better tomorrow?” questioned Srivastava. Agreed Jasbir Kesar, a writer from Punjab, adding if the words and voices did reach the marginalised and how these seminars, progressive thoughts and new writings must reach rural areas and small towns . “Katte bhi chalo, badhte bhi chalo, baju bhi bahaut hai, sar bhi bahaut,” she quoted Faiz as her closing statement.

Prof Chauthi Ram Yadav, a critic from Banaras Hindu University (BHU), said whenever there was oppression against Dalits and tribal people, nobody came out on the streets in their support.