Chicago, May 5, 2015: 200 Sikhs from the Chicago area came to participate in a fund raising event on Saturday, May 2, 2015, to support a national media awareness initiative on Sikhism and Sikh identity launched by the National Sikh Campaign (NSC). The NSC team also visited the Sikh Religious Society of Palatine Gurdwara and Illinois Sikh Community Center on Sunday and addressed the community. The initiative was well-recieved by the community. This was the first major fundraising event of the National Sikh Campaign for this Sikh media campaign and close to $34,000 was collected.

NSC’s representatives presented a detailed plan to create awareness about Sikhism and Sikh identity through media in America. The media plan has been advised and created by AKPD, President Obama’s media company, founded by Obama’s political strategist, David Axelrod. Under this plan, specifically crafted ads will be placed in the national and local TV channels and digital sites on Sikhs. According to the organizers ‘this will help in familiarizing the Americans about the community and Sikh identity of turban and beard.” 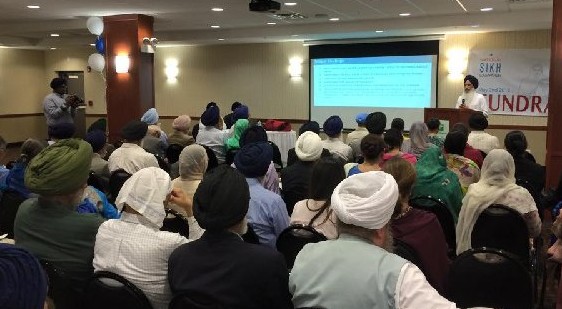 Dr. Rajwant Singh, Co-founder of National Sikh Campaign asked the audience of how many have had the experience of being identified other than being a Sikh, majority of the people raised their hand. Dr. Singh said, “This needs to change and we cannot continue to accept this. It is in our hand to change how people see us or treat us.” He said, “If Guru Nanak had come in this age, he would be the first one to adopt all various modern day tools to communicate with the world. He used every possible mean during his time and why can’t we do it in our times.”

Jivan Singh Achreja presented the road map of the various steps being taken by the NSC. He said, “It started with the polling and focus group data collection which was conducted by Hart Research Associates. Hart Research is headed by Geoff Garin, Hillary Clinton’s top political strategist who also advises the World Bank, the Harvard University and Bill and Melinda Gates Foundation. He added, “This report not only showed how Americans perceive Sikhs but it also collected specific input and feedback from common Americans on Sikhs to be presented in the media so larger American public can relate to Sikhs. This is very crucial information which was missing so far in our efforts to find a connection with Americans.”

Gurwin Singh Ahuja presented the highlights of the report that showed that when Sikh values of equality, gender equity and tolerance of other religions were presented to specific targeted groups, perceptions changed over 18-20 percent which is unusually high. He said, “The most significant group which showed positive shift was among the Republicans and Evangelicals, a section of the population which is usually not perceived to be closer to minority groups.” Gurwin Singh said, “This data enlists specific strategy to reach out and create bond with Americans and we as a community must make use of this to launch a media campaign.”

Kulwant Singh Hundal introduced the guest speakers and the program had started with Ardas(prayer) by Bhai Mohinder Singh, a well-respected religious figure of the Chicago area who is now serves at Wheaton Sikh Gurdwara. Among those present in the audience were President of the Sikh Religious Society of Chicago Gurdwara, Jasbir Kaur Saluja and Amarjit Singh, President of Illinois Sikh Community Center Gurdwara in Wheaton, Illinois. Many other prominent members of the community joined to express their endorsement of the program. Illinois Sikh Community Center became the first Gurdwara to write an official check of $1000 to the campaign.

Paramjit Kaur, secretary of the Sikh center said, “It was important for us to officially endorse this noble effort to spread the awareness about Guru Nanak’s path and we sincerely appeal to all gurdwaras in America to do the same.” Sikh Religious Society under the leadership of Jasbir Kaur Saluja had sent an official delegation to NSC’s National Gurdwaras meeting last year.

Jasvir Kaur Singh, main organizer of the event, said, “The response of the community is beyond our expectations. People have been waiting for an initiative like this for years. Finally we all can come together to make a conducive environment for younger ones who many times face a hostile situation due to their identity. We are also touched by so many people coming and wanting to join this campaign as volunteers.”

Sarwan Singh, member of the organizing team said, “When you present a well-thought plan to the community, people are ready to support and this is what we have seen today. Positive feedback is coming from across the board. That shows that people have been wanting to create better awareness about Sikhism and Sikh tradition. We will now take this campaign to nearby areas of Indiana and Wisconsin because there is a large Sikh population who will certainly welcome this idea.”

NSC was launched last year in March and it has 15 National Charter members who gave the initial funding to start this initiative. Fund raisers are being organized through out the nation to get support from the community.