New Delhi: The tall claims of Indian state that it has secured a major diplomatic victory against China during its two months long military stand off fell flat as the Chinese army has resumed the construction of the road  on the Doklam Plateau, just 10 km from the location of the last conflict. The Doklam Plateau is claimed by both Beijing and Bhutan as their territory. India backs Bhutan’s claim. 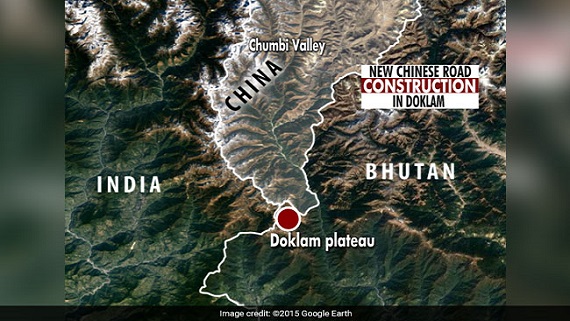 Construction in the same area that India holds highly sensitive.

From the last one month the pro-hindutva ruling elite of India had been beating the bush in media about their so-called ‘tactical defeat’ at the hands of its supposed aggressive posture under their leader Indian PM Narendra Modi. But on the contrary and barely 10 kilometres from the location of the stand-off, China is expanding an existing track, reinforcing its claim to the disputed and remote Doklam Plateau.

Earlier, today Congress Vice-president Rahul Gandhi while taking a jibe against Indian Prime Minister Narendra Modi reportedly said that after he was done with “thumping” his chest can he explain reports of road construction activity by China in Dokalam, notes The Tribune (TT).

The stand-off dates back to mid-June this year when Indian soldiers crossed the Sikkim border to stop the construction of a Chinese road near the “Chicken’s Neck”, a thin strip that links India to its northeastern states. After nearly 70 days of soldiers from both sides staring down at each other just 150 metres apart, the conflict, described as the worst in decades, subsided with both countries accepting that they were withdrawing their troops, though details were sketchy, reads a quote from a report published in an English vernacular.

Backing out last time, China has now shifted its unused road construction material North and East of the face-off site. Road construction workers brought into the area are accompanied by upto 500 soldiers though there are no indicators that these soldiers will be permanently based in the area – the Chinese town of Yatung, which is less than 20 km away as the crow flies, is a few hours by road and accommodates them. Neither are there signs of permanent structures to accommodate Chinese soldiers in the area which is snow-bound and bitterly cold in the winter.

During its interaction with the media the Army officials has stated that the new road construction is meant to be a strong signal of Beijing’s intent to prove its territorial claims. This may fireball into a major military conflict if the situation is not controlled, reports NDTV.