Beijing: As per the media reports published in an English vernacular China’s state run media outlet has claimed that India is receiving a “massive influx” of ”foreign investments” which will greatly enhance its ability to develop the manufacturing sector and China should “keep calm” and start working on a more effective growth strategy for the new era.

“This massive influx of investment by foreign manufacturers is of great significance for India’s economy, employment and industrial development,” read a quote form an articles published in state run Global Times. 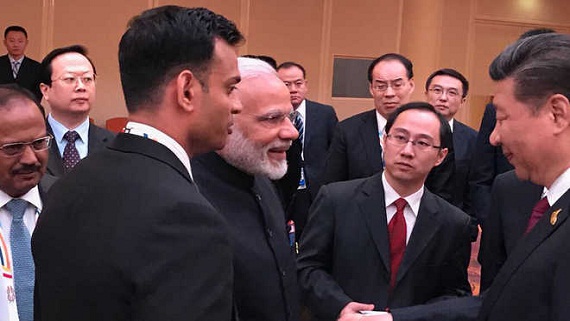 File photo of Xi and Modi.

“China should be calm seeing India’s rise. To cope with competition from India, China could start working on a more effective growth strategy for the new era now,” it further read.

The influx of foreign manufacturers is addressing some of India’s weaknesses and enhancing its manufacturing ability, with Chinese companies also playing an important role in the process, the article claimed.

“This is a repeat of China’s introduction of foreign investment, which is why it is likely that India may succeed. If in the past India lacked capital, a developed manufacturing sector and skilled manufacturing workers, the foreign manufacturing inflow is now helping India address the problem, backing up the government’s ‘Make in India’ initiative,” reads the article while stating the importance of Chinese investment in for India’s economy.

“It should be pointed out that what is happening in India occurred in China two decades ago. Just like what happened with China during its reform and opening-up, the arrival of foreign manufacturing will greatly enhance India’s ability to develop its manufacturing sector, which will help in cultivating a large number of skilled workers, managers and factories,” notes The Tribune (TT).