New Delhi:  As per the media reports India continues to upgrade its nuclear arsenal and redraft its nuclear doctrine with a primary focus  on China, earlier the nuclear strategy of India used to be traditionally  Pakistan being at the center stage. But now it seems  to have place increased emphasis on the Communist giant. 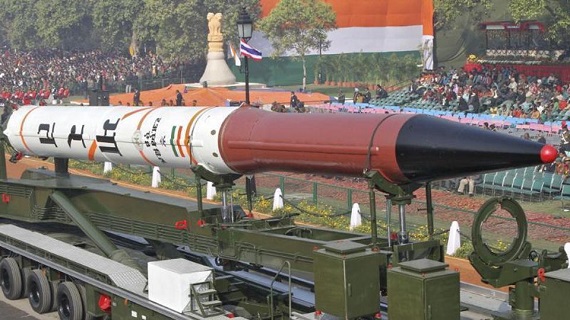 The Agni 4 missile on display for the Republic Day parade in New Delhi. (File Photo).

According to the reported article published by two  top American nuclear experts for July-August edition India is now developing a missile which can target all of China from its bases in south India.

It is estimated by the American nuclear experts Hans M Kristensen and Robert S Norris that India have produced enough plutonium for 150-200 nuclear warheads but has likely produced only 120-130.

Conventionally, India has been focusing on deterring Pakistan, its nuclear modernisation indicates that it is putting increased emphasis on its future “strategic relationship with China,” they reportedly wrote in their article.

“That adjustment will result in significantly new capabilities being deployed over the next decade that may influence how India views nuclear weapons’ role against Pakistan.” they further added.

“At least four more systems are in development. The development program is in a dynamic phase, with long-range land- and sea-based missiles emerging for possible deployment within the next decade,” they further added.

India is estimated to have produced approximately 600 kilograms of weapon-grade plutonium; however, not all the material has been converted into nuclear warheads, the experts said.

Moving further with their article Kristensen and Norris said that the two-stage, solid- fuel, rail-mobile Agni-2, an improvement on the Agni-1, which can deliver a nuclear or conventional warhead more than 2,000 kilometres is probably targeted on western, central, and southern China.

Although the Agni-4 will be capable of striking targets in nearly all of China from northeastern India (including Beijing and Shanghai), India is also developing the longer- range Agni-5, a three-stage, solid-fuel, rail-mobile, near- intercontinental ballistic missile (ICBM) capable of delivering a warhead more than 5,000 kilometres, notes Hindustan Times (HT).

“The extra range will allow the Indian military to establish Agni-5 bases in central and southern India, further away from China,” the article purportedly said.