Chandigarh: Indian and Chinese troops were involved in a heated exchange in eastern Ladakh near the Pangong Tso Lake on Wednesday (Sept. 11), according to media report.

The reported exchange triggered after Chinese Army personnel objected to patrol by Indian soldiers in the area.

The incident took place at the Pangong lake when the Indian patrol was prevented from moving by the Chinese leading to jostling. 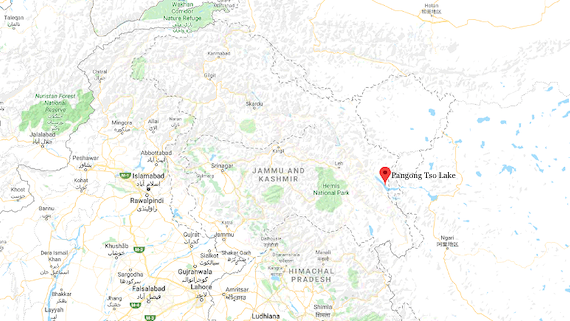 Indian media reports quoted Army sources saying that the incident occurred due to deferring perceptions about the Line of Actual Control (LAC) between India and China.

The face-off began on the northern bank of the 134-km-long Pangong Tso (Tso means lake), two-thirds of which is controlled by China as it extends from Tibet to Ladakh, soon after dawn on Wednesday.

“Indian soldiers were on a patrol when they were confronted by People’s Liberation Army soldiers, who strongly objected to their presence in the area. This led to a scuffle between the rival soldiers, with both sides sending some reinforcements to the area… the face-off was in progress at the site till the evening,” a report in Times of India (TOI) quoted sources.

The disputed “Finger-5 to Finger-8” (mountainous spurs) area on the north bank of Pangong Tso, incidentally, had witnessed a violent clash between Indian and Chinese soldiers, with stones and iron rods being used to injure each other, on August 15, 2017.

The incident had coincided with the then much more serious troop face-off at the Bhutanese territory of Doklam near the Sikkim-Bhutan-Tibet tri-junction that year. Though the two armies had disengaged from the face-off site at Doklam after a 73-day confrontation, the Chinese Army (PLA) has constructed military infrastructure and helipads as well as permanently stationed troops in north Doklam.

Latest media reports say that the repeat of a prolonged Doklam-like situation was averted on Thursday after the armies of China and India withdrew to their own perceived lines following a face-off lasting a few hours in eastern Ladakh on Wednesday. As per reports Brigadier rank officers from the two sides holding a meeting at Chushul and deciding to pull back. The face-off took place a month before President Xi Jinping’s visit to India.