Chandigarh: (Tamizharasan): Thirumurugan Gandhi, civil rights activist and coordinator of May 17 Movement has been booked under the draconian Unlawful Activities Prevention Act (UAPA) act for expressing his solidarity to the Palestinian struggle in a public meeting, in 2017.

Thirumurugan Gandhi is in jail for the past 14 days. He was detained in the Bangalore international airport on his return from Geneva where he was attending the UNHRC sessions. Thereafter he was brought to Chennai and imprisoned in Vellore prison. Ever since then, 13 new cases have been filed on Thirumurugan Gandhi. Out of these 13, four cases have been booked for Sedition under IPC Section 124-A. The sedition cases are booked for the flimsiest of the reasons like Garlanding statues of Periyar and Ambedkar and addressing the gathering, posting videos on Facebook about the Sterlite massacre. 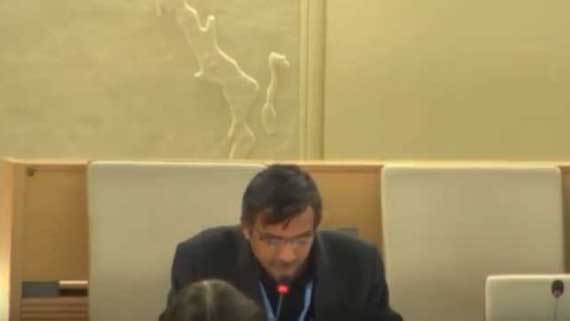 Thirumurugan Gandhi, civil rights activist and coordinator of May 17 Movement

He is being kept under isolation in the prison and made to travel between various districts in Tamil Nadu for attending the court sessions. By putting him through physical and mental stress the government is making its intention clear. Even today when he was brought to the Alandhoor magistrate court, the police have denied his repeated requests to be taken to a clinic and did not even stop for a urinal.

Today, Thirmurugan Gandhi has been booked under the notorious Unlawful Activities Prevention Act (UAPA). The case has been filed for his participation and speech in a public meeting organized by the Islamic organizations in TamilNadu in 2017, to condemn the oppression and human rights violations in Palestine and to express the solidarity with the Palestinian struggle.

The Unlawful Activities Prevention Act, which was brought in with the pretext of tackling terrorism, has been used against political activists. The person accused booked under UAPA has a bleak prospect of getting a bail and can be kept under detention for 180 days even charge sheet being filed.In his last visit to UNHRC he had spoken the targeted of Sedition laws, UAPA and National Security Act against civil society activists.

* Tamizharasan belongs to May17 Movement.