Chandigarh (November 30, 2017): After claiming to have “solved” the cases of alleged ‘target killings’, the Punjab government yesterday announced to hand over all these cases to the National Investigation Agency (NIA). Earlier, the case related to killing of RSS activist Jagdish Gagneja was handed over to the Central Bureau of Investigation (CBI) and the case related to killing of another RSS activist Ravinder Gosain was handed over to the NIA. 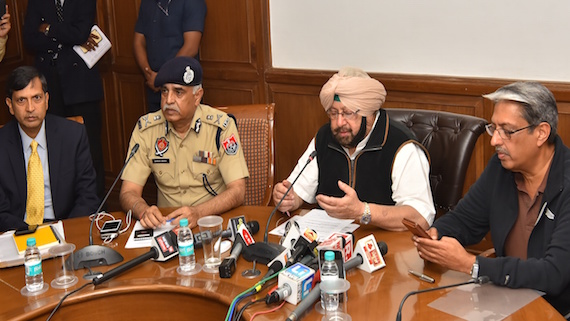 Amarinder Singh had patted the back of Punjab police for cracking down the alleged international conspiracy in these cases where even NIA and CBI was yet to find clues. But now the government said that the it has decided to handover the cases to NIA as there were possible national and international ramifications of these cases.

Chandigarh: November 30: Given the possible national and international ramifications of the conspiracy behind the targeted killings in the state, the Punjab Government has decided to hand over the investigations of seven cases to the National Investigation Agency (NIA).

Disclosing this here on Thursday, an official spokesperson said it had been decided to transfer the cases to NIA under Section 6 of the National Investigation Agency (NIA) Act, 2008, since the modus operandi in all the cases was the same.

It had also been found that the interstate as well as international perpetrators/handlers/actors and terrorist/militant angle involved in the criminal conspiracy, to disturb peace and communal harmony in the border state of Punjab by selectively targeting leaders of certain groups, were the same.

The decision to transfer the cases was taken after a NIA team, led by its Director YC Modi, held discussions with officials of Punjab Police on Monday. The two teams mutually felt that the central agency was better equipped to undertake further investigations into the cases. With handlers, conspirators and financers in all these targeted killing cases operating from foreign soil, in countries such as UK, Canada, Italy etc, the investigations needed to be more broad-based, they both agreed.
Following the decision, Chief Minister Captain Amarinder Singh has directed the Punjab Police to hand over all the material in the cases to the NIA for further investigation into the cases, in which the police had recently arrested UK citizen Jagtar Singh Johal and some others to solve the cases of targeted killing of RSS/Shiv Sena/DSS leaders in the state between January 2016 and October 2017. The Chief Minister has directed that complete support be extended to NIA to uncover the full extent of the conspiracy to disturb Punjab’s peace and harmony.

The spokesperson said the move was aimed at ensuring that the foreign based networks conspiring against Punjab are dismantled and action taken against foreign handlers (both organizations and individuals) through cooperation with the Ministry of External Affairs, Interpol, Europol, foreign governments etc. It was vital to crack down on such elements that are carrying out murder and mayhem, and revive terrorism in Punjab.

The decision would also help dispel false, slanderous and orchestrated social media campaign launched by interested governments, organisations and elements to raise funds, and to deter the police and prosecuting agencies from doing their duty, it was felt.

The seven cases being handed over to NIA include killing of RSS leader Ravinder Gosain, in which the investigation had already been handed over to NIA before the terror module was busted by the Punjab Police. Gosain was killed in Ludhiana on October 17 this year.

The government has proposed that the case of the murder of Brig. Jagdish Gagneja, State Vice President RSS, which was being probed by CBI, be also transferred to NIA. Gagneja was killed in Jalandhar in August 2016.