Dhuri/ Sangrur: It seems that Central minister Thawar Chand Gehlot’s statement terming Punjab as number one state in drugs abuse continues to “hurt” Punjab Chief Minister Parkash Singh Badal. Gehlot Central minister for social justice and empowerment had stated that that Punjab ranked number one in the country in consumption of drugs. He was addressing a joint press conference with CM Badal on June 26 at Hoshiarpur.

Badal who was quick on Friday (June 26) to get the mic and condemn Gehlot’s statement today said that Punjab was bearing the brunt of its war against drugs. CM said that the state was being maligned irrespective of the fact that not even a single ounce of drug was produced in it.

Giving out an impression that Punjab government could not be blamed for drugs abuse in state, Parkash Singh Badal said that drugs like opium, heroin, smack and others were smuggled in the state from across the border whereas other narcotics like poppy husk were coming to Punjab from states like Rajasthan, Madhya Pradesh and others where it was sold openly. He was addressing media persons on the side lines of an event in Dhuri assembly segment. 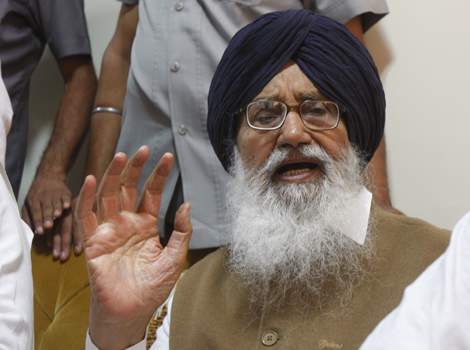 It is notable that condemning Gahlot’s statement that Punjab ranks number one in drugs abuse, CM Badal had clarified (yesterday) that: “The surveys mentioned by Gehlot are old and were done five to six years ago. Everybody is targeting Punjab but nobody understands the real problem”.

“We have controlled the situation and in the past few years not even a single person has been added as the new addict. This is our success,” he had added.

Addressing the media-persons today CM Badal said: “ironically the state’s image has been belittled just because Punjab was fighting the war against drugs from the forefront.”

“We have suffered earlier as the state fought Country (India)’s war against militancy to protect unity and integrity of the country and now we are being victimized for waging a direct war against drug menace,” he said, adding, state security agencies have cracked down heavily on the drug peddlers by nabbing. He said that the state government has set-up a network of drug de-addiction and rehabilitation centers to detoxify the drugs addicts and help them in their rehabilitation.

It is notable that prominent faces of the ruling Badal Dal, including cabinet minister Bikram Majithia, faces serious allegation of patronising drugs smuggling and trade in Punjab. Punjab government has been facing all around attack, including fires for it’s power ally BJP, on the issue of rampant drugs abuses in Punjab.