Vancouver, Canada: The Vancouver Heritage Foundation has organized a walking tour this weekend to highlight some of the lesser known stories of the South Asian community’s history in Kitsilano.

South Asian peoples have had a long history in the Vancouver neighbourhood. Kitsilano was the site of the first Sikh Gurdwara in North America, which opened in 1908 on West 2nd Avenue.

And it was also the site of tension, according to walking tour organizer Naveen Girn — especially when their right to vote was taken away in 1907.

“There was this conflict in the community, about what kind of idea did it want to be,” Girn said. “There was a strong independence movement rising up, and Vancouver was a focal point of that, for India’s independence. There was another part of the community that was quite loyal to the Crown.” 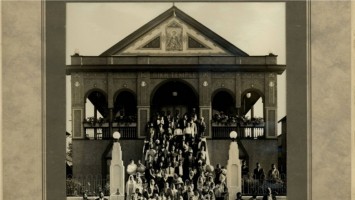 The Sikh congregation outside the Sikh Gurdwara in Kitsilano. Built in 1908, it was the religious, political, social, and cultural heart of the community. The Gurdwara was sold in 1970 to build the Ross Street temple. (Simon Fraser University Library)

Girn hopes the walk will give participants a better understanding of South Asian peoples’ long history in the neighbourhood. It’s a history that shows a deep sense of belonging to a place, but also the alienation and racism the community faced.

Girn says that the lumber industry on False Creek was the initial draw for South Asian immigrants. From there, the community grew, and many people moved to other places in B.C., up to the coast or towards Abbotsford.

There were many examples of bridge building between the South Asian community and other people who lived there: Europeans, Chinese and First Nations to name a few.

But Girn says the walking tour will also tell the story of one of Canada’s darkest moments: the turning away of the Komagata Maru, when over 350 Indian immigrants were denied the right to come to Canada despite being British subjects.

“The ship was under surveillance 24 hours a day, and people would take pleasure crafts to go out and gawk at the passengers,” Girn said. “You can imagine these passengers trapped on the ship, and the community on shore galvanized as well.”

Girn says the community rallied at a very important meeting at Dominion Hall, and people that made only dollars a day put all their resources toward fundraising to buy the ship’s charter and pay the passengers’ legal fees.

He says the Komogata Maru incident was a turning point for B.C.’s South Asian community, and has ties to other stories of immigration, gender, the right to vote and labour.

Girn said the tour will visit the homes of many influential South Asians in Kitsilano history, and will even have some guest appearances from people who lived through the history and remember some of the sites which have changed dramatically.