Zafarnamah Recorded in Persian for the First Time:

It is noteworthy Dr. Sartinder Sartaj has recorded Zafarnaham in Persian pronunciation and accent. It is for the first time that the Zafarnamah is sung and recorded in original language in which it was written.

Who Has Filed The Complaint: 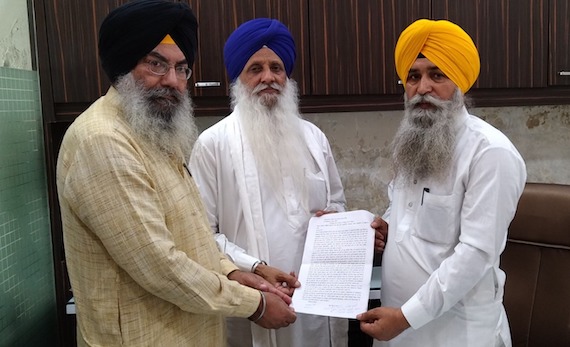 What The Complaint Says:

The complainant have maintained that there were concerns regarding Gurmukhi transcription and pronunciation of Zafarnamah that was originally written in Persian, the Iranian language.

They said that Dr. Satinder Sartaj should withdraw his musical recitation of Zafarhamah and re-record it in ‘correct’ pronunciation in accordance with advise of experts of Persian language.

What’s the Basis of Concerns Raised in Complaint:

The complaint (copy available with Sikh Siyasat News) is written in generic terms and does not provide and concrete basis or reference for concerns raised in it. While maintaining that there mistakes of pronunciation in Zafarnamah sung by Dr. Satinder Sartaj, the complaint makes a running reference and says “according to a academician and expert of Persian” but does not say anything further and not even specifies the name of that expert.

The complainant, however, clarified that they do not intend to create any unwanted controversy and want their concerns addressed.

READ A COPY OF COMPLAINT/LETTER:

The details of YouTube video of Zafarnamah recited by Dr. Satinder Sartaj clarifies that he had taken assistance from Muzaffar Ali and Aziz Mahdi of Embassy of Iran.

In one of his interviews with a TV channel, Dr. Satinder Sartaj had clarified that the was very cautious about correct pronunciation of the Zafarnaham and took advise from experts of Persian by consulting Embassy of Iran. He said that many transcripts and translations were compared to identify the correct version and the Punjabi/Gurmukhi transcription was also done in accordance with the Persian pronunciation.

Sikh researcher and orator Dr. Sukhpreet Singh Udoke has uploaded a video on this issue. In this video Dr. Udoke revealed that a complaint had reached Akal Takht Sahib  about Dr. Satinder Sartaj’s recitation of Zafarnamah few days back. He said that Giani Harpreet Singh tasked him to probe this matter and prepare a report. He said that he has researched the matter on the basis of about 21 available documents, including Persian, Urdu and Gurmukhi transcripts of the Zafarnamah.

In his video Dr. Sukhpreet Singh Udoke has thoroughly addressed the concerns raised in a video available over social media.

Dr. Udoke said that he will submit his written report to Giani Harpreet Singh in coming days.