Manmohan Singh Bharara President Gurudwara Sachkhand Darbar and one of the most dedicated Sikh of Connecticut also provided written documentation to Town of Southington.

Swaranjit Singh Khalsa said that “By recognising this as genocide Town of Southington has proven that they feel the pain of Sikhs all across the globe”.

Khalsa said “I urge other cities of Connecticut to also declare it as a genocide so at least Sikhs outside India can have some closure”. 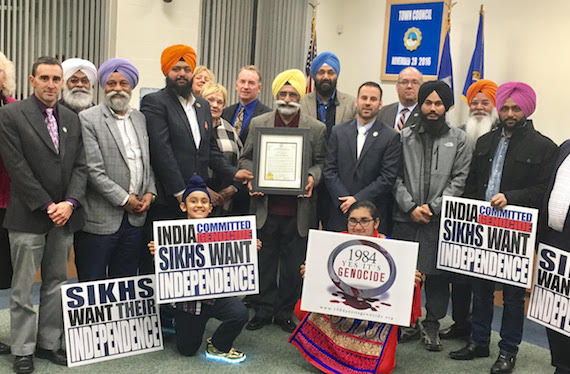 He also Thanked Southington City Council On behalf of City of Norwich and Sikh community and made a statement that “Actions speak Louder than words and Town of Southington has proven by providing proclamation that they stand with Sikhs of Connecticut”.

Manmohan Singh Bharara Co-Founder of Southington Sikh Temple Gurdwara Sahib and Founder of Hamden Gurudwara Sachkhand Darbar gave a speech to make everyone aware how Sikhs are still slaves in India and How Indian Constitution 25(B) say sikhs are Hindu and trying to wash out minorities from India.

The official proclamation by the Southington Town Council reads as follows:

Be it hereby known that:

The Southington Town Counicl hereby offers its
Sincerest condolences for the:

Whereas, November 2016 marked the 32nd year anniversary of the horrific anti-Sikh pogroms, which claimed the lives of thousands of innocent Sikhs throughout India in the first week of November 1984 Sikh Genocide; and

Whereas, Sikhs were beaten with iron rods; forcibly shorn of their hair, doused with kerosene; and set on fire; Children as old as 13 days of age roasted alive and killed ruthlessly; while their mothers were being gang raped: and sexually assaulted: and

Whereas, Sikh homes, businesses, and houses of worship (Gurdwaras) were looted, damaged, and destroyed during the pogroms resulted in the intentional and irreparable destruction: and Whereas, Eyewitnesses, journalists, and human rights activists have compiled evidence showing that government and law enforcement officials organized, participated in, and failed to intervene to prevent the brutal killings through direct and indirect means; and

TOWN OF SOUTHINGTON, STATE OF CONNECTICUT