Copy of Criminal Complaint against Capt. Amrinder Singh in USA by Sikhs for Justice 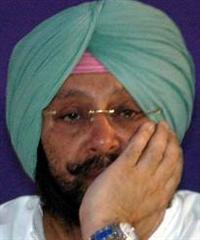 New York, NY, USA: Ahead of the US visit of Capt Amarinder Singh, a Sikh rights group sought criminal prosecution of former Chief Minister of the State of Punjab for reinstating, promoting and protecting the police officials named repeatedly by victims and human rights groups as perpetrators of torture, disappearances, and extrajudicial executions during counter insurgency operations in 1990’s.

“Sikhs For Justice” (SFJ), a human rights group lodged a criminal complaint against Congress Member of Parliament Capt Amarinder Singh with the US Attorney General Under Section 509B of the Human Rights Enforcement Act of 2009 for aiding, abetting and shielding the crimes of torture, extra judicial killings and genocide of the Sikh population.

Criminal complaint against Capt. Amrinder moved by Sikhs For Justice reads as follows: