New Delhi: Hindutva fountainhead Rashtriya Swayamsevak Sangh (RSS) chief here on Friday called for a meeting of the Vice Chancellors and academicians over the weekend to discuss how social science research in the country should be guided and how to create a “positive national narrative in academics”. Hindutva outfit has been attempting to control academic discourse in order to construct pro-Hindutva narrative.

Media sources indicate that around 500 invitees will attend the closed-door meeting under the banner of ‘Gyan Sangam’ in the Capital where apart from Mohan Bhagwat, senior RSS functionaries will take stock of how the curriculum needs to be revisited, with emphasis on history and social sciences. Suggestions will also be made on textbook drafting and areas of research that universities can undertake in areas such as foreign policy and constitutional matters.

While referring to the source from the RSS the media reports said that  the meeting will also review how to prevent campuses from being bastions of the Left ideology.

The source further stated that the events such as beef eating festivals, Mahishasur Shahadat Diwas and Kiss of Love campaigns that erupted across university campuses over the past few years are fallout of communist ideology foisted on students.

The RSS is of the firm believe that academe should be blamed for “cultivating” communist ideology and paving the way for Indian (Hindutva) traditions and cultural studies being “questioned and denigrated”. 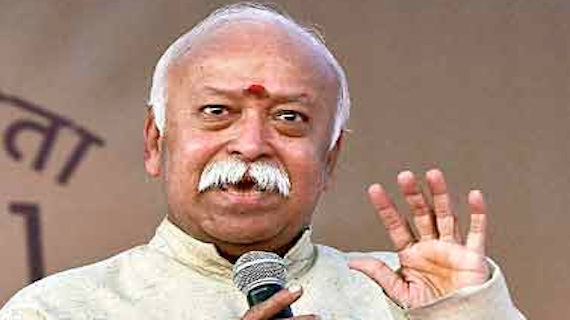 While quoting  an anonymous  sources the Hindustan Times (HT) reported that “Support for such campaigns came from the theories evolved by neo-left academicians who have made mythological character Ravana into a hero and question the relevance of mythological goddess Durga.”

Alarmed by the communists “capturing the mind space of the youth”, and to “unfetter campuses from such ideology,” the Hindutva outfit will set things rolling at the two-day meeting.

The RSS and its students’ wing, the ABVP, have been at loggerheads with students unions, particularly those aligned with the Left parties over organising beef festivals while the Hindutva outfit pushes for a complete ban on its sale and slaughter. The Mahishasur Diwas, which was organized in JNU campus ostensibly to celebrate the mythological figure as an icon of the backward classes had sparked off a confrontation between the students and the government, reads a quote published in the English vernacular.

The functionary while speaking with the HT in his statement claimed that the programme is intended to “correct the biases that have crept in interpreting history and cultural studies”.