Notably, Arvind Kejriwal is facing defamation accusations along with some other AAP leaders in a local court in Amritsar. The complaint against AAP leaders was filed by SAD (B) leader and Punjab minister Bikram Majithia for allegedly defaming his as a “drug lord”. 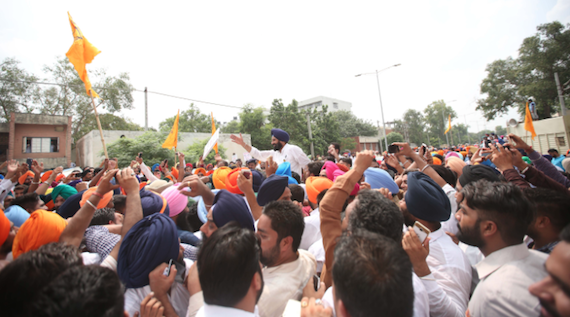 Bikram Majithia waives his hand towards his supporters

A panorama view of gathering as released by SAD (Badal)

The release further maintains that “more than 20,000 youth spontaneously” gathered in and around the court complex here with many more being stranded in traffic jams in various parts of the city.

“Mr Majithia, who found it even difficult to enter the court premises due to the mammoth youth gathering, registered his presence in the court of Additional chief judicial magistrate here and set the ball rolling to put Arvind Kejriwal in jail on criminal defamation charges”, reads the statement issued by SAD (Badal).

A view of gathering of AAP supporters outside Amritsar Court

ALSO READ: Arrest me within six months; otherwise I will arrest you after six months”: Kejriwal dares Majithia …

Both parties, AAP and SAD (B), attempted to use the court appearance to showoff their “support-base” to create a public impression in their favour.