Jaipur, Rajasthan: A local court on yesterday (on May 7) ordered the Jawahar Circle police station to register a criminal case against Sirsa (Haryana) -based Dera Sacha Sauda chief Gurmeet Ram Rahim wrongful confinement and abduction of a woman.

Kamlesh Kumar (27), a resident of Manoharpura slum in Jagatpura area of Jaipur, filed a criminal complaint in the court on May 5, 2015, after the police refused to lodge a case against Singh.

According to the woman’s husband, she has been missing since she visited him in the last week of March. 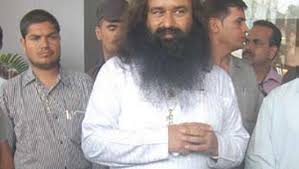 Kamlesh had informed the police that he, his wife Guddi Devi (25) and their three-year-old son had visited the Dera Sauda Sirsa in Haryana on March 24.

He had said that they were in the dera till March 29, after which he had not met his wife again. He had claimed that the Dera workers had not given him satisfactory answers when asked about his wife’s whereabouts.

Chief metropolitan magistrate of Jaipur City Gouri Shankar Sharma on Thursday (May 7) asked the police to lodge a complaint under sections 344 (wrongful confinement for 10 or more days), 365 (kidnapping or abducting with intent secretly and wrongfully to confine a person), 346 (wrongful confinement in secret) and 120B (conspiracy) against Gurmeet Ram Rahim, Dera managing director DPS Dutta and others.