Cow Slaughter In UP May Invoke NSA & Gangster Act Against The Accuse, Says Media Reports

Lucknow: As per the media reports emanating from Uttar Pardesh Cow slaughter and its transportation will now invite punishment under the National Security Act (NSA) and Gangster Act, a government official said on Tuesday.

”People caught for cow slaughter and transport of milch animals for slaughter are to be booked under the stringent National Security Act and Gangsters Act in Uttar Pradesh” reads a quote from the statement issued by state police chief Sulakhan Singh and published in The Telegraph. 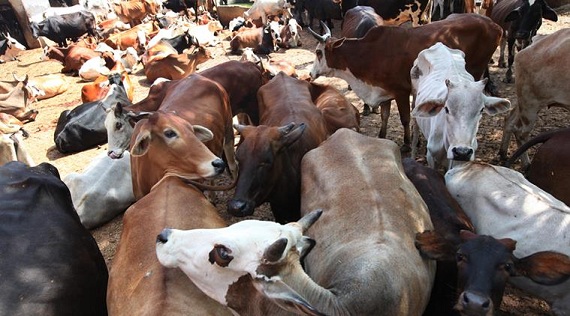 Ever since he became the Chief Minister, Yogi Adityanath has made it amply clear to law enforcement agencies that cow slaughter will not be tolerated.

Sulkhan Singh has also asked all Inspector Generals and Deputy Inspector Generals to also spruce up law and order by increasing police patrolling and to get the bails of all gangsters and organised criminals cancelled through courts, said media sources, reports Greater Kashmir.

The reported six-page directive issued by state police chief has no mention of any action against Gau rakshaks (cow vigilantes) and lynch mobs.

Furthermore, the officials have been asked to post policemen and policewomen at malls, shopping complexes and busy thoroughfares to check eve teasing and pick-pocketing.