Washington D.C.: Last night, the U.S. Army granted a Sikh American officer a long-term religious accommodation allowing him to continue serving his country while maintaining his articles of faith. The landmark decision makes Captain Simratpal Singh, a decorated combat veteran, the first active duty Sikh soldier to receive approval to maintain his articles of faith while actively serving in the U.S. Army.

Captain Singh graduated from West Point with honors in 2010, but was forced his first week to make the untenable choice between his religion and his career in order to serve. Following failed attempts to obtain an accommodation, he cut his hair and shaved his beard. After successfully completing Army Ranger School, a Bronze Star tour in Afghanistan, and receiving numerous other accolades in various military positions, Captain Singh filed a religious accommodation request on October 21, 2015. 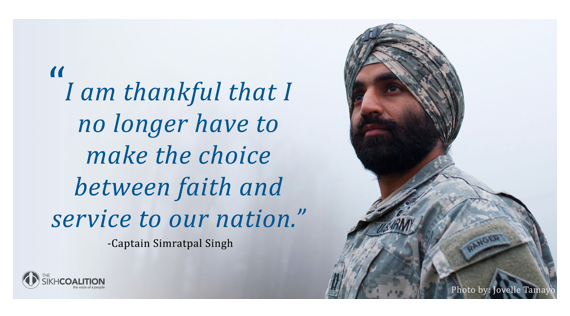 “Captain Singh again proves to our military that the religiously mandated turban and beard do not hinder the ability to successfully serve,” said Sikh Coalition Legal Director, Harsimran Kaur.

Throughout this process, the Department of Defense made attempts to delay and prohibit his accommodation, including a March 3rd court-denied attempt to subject Captain Singh to unprecedented, prejudiced testing. After this hard-won legal victory, and months after submitting his accommodation request, Captain Singh has finally realized his dream of becoming spiritually whole.

“With this historic accommodation, we hope that the U.S. military will finally move past protracted, case-by-case religious accommodations and recognize that the time for permanent policy change is now,” said McDermott Will & Emery partner and Sikh Coalition co-founder, Amandeep Sidhu.

Won the battle, but the campaign still continues

Despite these changes, the presumptive ban on Sikh articles of faith still remains and accommodation requests are still being decided on a case-by-case basis. On March 29th, the Sikh Coalition, the Becket Fund for Religious Liberty, and McDermott Will & Emery filed another federal court lawsuit, which demands that the Army accommodate three Sikhs’ articles of faith, including turbans, unshorn hair and beards, so that each can begin Basic Combat Training with their respective units in May 2016.

The lawsuit was filed after the U.S. Department of Defense ignored a demand letter that was sent on March 23rd, and failed to provide decisions on their pending requests for accommodations. That litigation remains ongoing.