Amritsar: The dimensions of internal crisis of the Sikh community was turned complex. The Punjab government has launched police crackdown against the organizers of the November 10 Sarbat Khalsa 2015 event. The government officials and pro-Badals media networks have initiated propaganda war against those who had called the November 10 event.

According to media reports the government has ordered Punjab police to “examine” video recording of the Sarbat Khalsa 2015 and identify (so-called) “hardliners”.

Sources told Sikh Siyasat News (SSN) that the police has started harassment of people who had taken part in the November 10 event.

Meanwhile, the government is alleging that “foreign forces” were behind the organisers of the Sarbat Khalsa. Punjab Deputy CM Sukhbir Badal blamed the Congress party and Pakistan’s ISI for “conspiring” for the Sarbat Khalsa 2015. 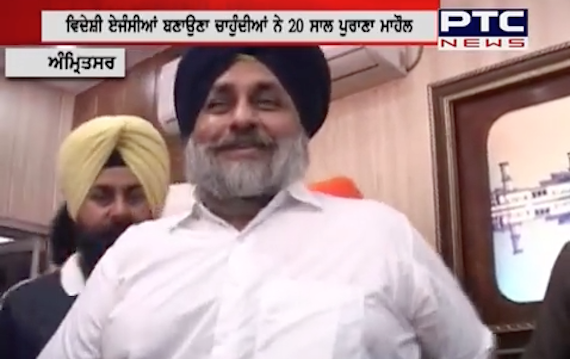 A screenshot from a news reported by PTC News | Photo Source: YouTube/PTC News

Sukhbir Badal said that it was an attempt to threaten the “unity and integrity” of the Indian state. Similar statements have been issued by other leaders of the ruling party.

Propaganda against the organizers fo the November 10 event is on full swing at pro-Badals news channel PTC News. The news channel labeled Jathedars appointed by the Sarbat Khalsa 2015 as “Apradhis” claiming that persons who are convicted or faced police cases can not be appointed as Jatehdars of Sikh takhats. Besides this PTC News is showing some “unlawfully” recorded phone calls to support Badal’s claim that the November 10 gathering was a conspiracy of the Congress party.

Previously Police claims based on phone calls were proved to be false:

It may be recalled that the Punjab government and the Punjab police had maintained that there was foreign hand behind the incident of beadbi of Guru Granth Sahib in Bargari village. The police had presented some audio tapes of recorded phone calls to support its claims and PTC had propagated those tapes extensively. But the police and government claims had soon fell flat as the whole story was found to be baseless. The Punjab police had admit in the case that it had no evidence to support it’s accusations against Rupinder Singh and Jaswinder Singh who were framed in Bargari beadbi case.

On the other hand there has been strong criticism of Badal Dal’s approach towards the organizers of the November 10 event. Gurnam Singh Sidhu of United Akali Dal (UAD) said that the Badal government was heading towards “Bhra Maru Jang” (warfare with in a community) by framing charges of sedition against organizers of the Nov. 10 event.

He said that the SAD (Badal), headed by Punjab Deputy CM Sukhbir Badal, degraded the Sikh institutions for his political gains by forcing Jathedars to pardon Dera Sirsa chief. He said that he the Punjab government totally failed to crack cases related to beadbi of Guru Granth Sahib. “It is no more a secret that in order to hide it’s failure the government had tired to falsely frame two Sikhs in Bargari beadbi case” he added.

“Now in order to hide it’s misdeeds the Badal government has been making false propaganda against organizers of the Sarbat Khalsa”, said he.

Meanwhile, the November 15 deadline set by October 25 Sikh gathering at Bargari village has ended. The Sikh organizations and Sikh pracharaks had announced to “gherao” (surround) SAD Badal’s MLAs, MPs and SGPC members after Nov. 15 if the government fails to arrest and book culprits responsible for committing beadbi of Guru Granth Sahib.

The Sikh pracharaks are reported holding meetings to chalk-out their strategy to implement the resolutions passed at Bargari.

SAD (Mann) leader MP Singh said that their party will co-ordinate with the Sikh pracharaks to find the possibilities of adopting common action plan.