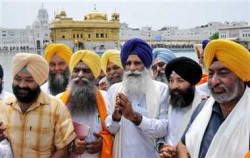 Kaithal, Haryana (July 30, 2014): As per information the first and crucial meeting of the Haryana Sikh Gurdwara Management Committee (HSGPC), which was scheduled to be held at Manji Sahib Gurdwara, Kaithal on July 29 would now be held on July 31.

The meeting had been postponed owing to the death of a nephew of senior vice-president of HSGMC Didar Singh Nalwi.

In wake of intense row over formation of HSGPC by Bhupinder Singh Hooda’s government in Haryana all eyes on 31 July 2014 meeting of HSGPC.