Chandigarh: Haryana Chief Minister Manohar Lal Khattar was to visit a Gurdwara Sahib in Dachar village in Karnal last Friday. He, however, cancelled his visit as a portrait of great Sikh of 20th Century Sant Jarnail Singh Bhindranwale was installed at the Gurdwara Sahib.

“I had earlier allotted time to visit the gurdwara, but later we came to know about Bhindrawale’s photo there. They were asked to remove it, but they refused to do so, following which I cancelled my visit,” Haryana CM M L Khattar reportedly told mediapersons on Saturday. 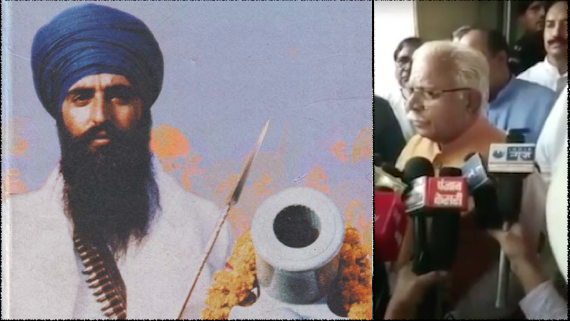 The gurdwara management said that there was no question of removing the portrait which was installed several years ago.

Agitated over Manohar Lal Khattar’s decision to suddenly cancel his visit, local Sikh Sangat reportedly held a meeting at the Gurdwara Sahib and demanded apology from the CM. They have announced to boycott the BJ P till the Haryana CM apologises.