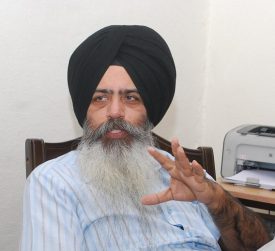 Some see the organization as an outfit of political novices or band of Sikhs who have acquired prominence solely because of their controversial or radical views. Others feel though small in strength, they represent the radical face of the community. Opinions may vary but the evidence is clear – since its rebirth, the Dal Khalsa has been articulating the cause of Sikh nationalism. All along, its agenda too has been clear; to ensure that Sikhs find an independent foothold in the comity of nations.

Fired by the example of martyrdom of Bhai Fauja Singh and his 12 associates on 13th April 1978 at Amritsar, several Sikh youth organizations and associations merged and gave rebirth to the Dal Khalsa on August 6, 1978 at Akalgarh Gurdwara in Chandigarh. The nomenclature “Dal Khalsa” was provided by Sirdar Kapur Singh, a Sikh political thinker and Professor of Sikhism. However, public announcement to this effect was made on 13th August, 1978.

Unfortunately, immediately after its rebirth, the rumour was circulated ad nauseam that Congress leader Gaini Zail Singh engineered its formation to checkmate Akalis. An innocuous expenditure of Rs. 98/- by Giani Zail Singh, for a press meet at Hotel Aroma, Chandigarh, was blown out of proportion that it became a reference point for all writers, journalists and authors who did not make efforts to shift the chaff from the grain. Ironically, even now, four decades later, the blinkered vision continues. 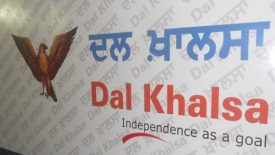 As far as we are concerned, there is nothing further from truth. There is no iota for truth in this accusation. As the new generation of the Sikhs was completely disillusioned with the Akali leaders who had belied the pride and destiny of the Sikhs, the Dal Khalsa was formed.

The organization has completed 39 years of its existence and entered into 40th year. It was formed to combat onslaught of neo-Nirankari sect on Sikhism and counters the discriminative policies of the Indian Union. The agenda was freedom of Punjab from India through democratic means. However, the act of hijacking on September 29, 1981 in order to protest against the arrest of Sant Jarnail Singh Khalsa Bhindranwale resulted in the organization acquiring ‘militant’ tag.

Though the act of hijacking brought the Dal Khalsa into limelight, the recognition that the organization achieved came with a heavy price. The subsequent developments including the arrest of one of its leader Harsimran Singh, life imprisonment to all 5 hijackers including Gajinder Singh, Satnam Singh and crackdown on party activists marked the downfall of the organization to an extent that it went into oblivion for 15 years.

After lying low following a ban imposed by the government of India for a decade or so, the Dal Khalsa staged a political comeback on 6 August 1997.

Gajinder Singh- an architect of the organization charted the new course for the party in 1997. The main aim of reviving the Dal Khalsa on a democratic path was to give a new and more focused look to the struggle. We knew that this would be a long and tiring path to achieve the goal.

To restart, a letter on 6 August 1997, through our counsel late Davinder Singh Chimni, was written to Home Ministry contesting the government’s arbitrary decision to ban the organization vide notification on May 03, 1982 u/s 3 of the Unlawful Activities (Prevention) Act, 1967 that lapsed in May 1992.

However, the comeback wasn’t really a smooth ride for the organization whose leader was perceived to be “guest” of hostile country.

Dal Khalsa was revived afresh in August 2001 with delegates electing Gajinder Singh as its chairman in his absence. The organization suffered another setback when after the attack on Parliament, the Union government placed Gajinder Singh’s name in the most wanted list of 20 handed over to Pakistan in 2002. Interestingly, his name was missing in the latest most wanted list of 50 terrorists. It has never been explained by the government that how his name was included in the earlier list and how his name has been excluded in the latest list.

The first 5 years saw a period of transition – from militant to political entity. From 2003 onwards, we grew rapidly. We may not have conquered mountains, but we have a humble sense of satisfaction that starting from scratch, we have traversed a few steps towards our chosen destiny. Unlike the Shiromani Akali Dal, we believe in ideological and principled brand of politics. While functioning as a democratic party we have achieved a lot. Equally, we have missed a lot.

We have certain confessions to make. Despite putting hard and sincere efforts, we failed to transform the Dal Khalsa into a mass base organization because of fear of harassment and witch-hunting in the hands of security establishment and the tendency of the people to stick to the powers that be. Our decision to stay away from electoral politics may be another reason for the people to shy away from joining our ranks and file. Nevertheless, we are comfortable with our strength as we know that we are “swimming against the tides”.

Publishing directory of June 1984 martyrs, building relations with minorities and ethnic groups representing the people of Kashmir, Nagaland, Tamil Nadu that are struggling for their rights, playing constructive role in raising Martyrs Memorial at Darbar Sahib are some of the work that has given us real satisfaction. Even as we failed to stop the Akali Dal controlled SGPC for killing the letter and spirit of the original Nanakshahi calendar , however, we have a sense of satisfaction that we did not let it go without a fight and till date , we stood by original almanac, which is manifestation of distinct Sikh identity.

The organization got a boast last year when on May 22, Akali Dal Panch Pardani announced its unification with Dal Khalsa and Advocate Harpal Singh Cheema was appointed its head. On international front, Dal Khalsa has entered into a workable relationship with Sikh Federation UK in England and Sikh Youth of America in USA.

On 39th foundation day, the organization reiterates its commitment to peaceful campaign to advance the mission. “For us the challenge is to find creative ways of continuing our non-violent struggle notwithstanding the state repression. We wish to pass on the baton of the struggle to our next young generation with a positive message”.

We are genuinely worried about the Punjab and safety of its inhabitants. The threats we face are real. There is a nuclear race on our doorsteps. The state is centralising more and more power, and it is becoming more and more Hindu in character. If you look at since the time the British left this region, constitutionally this process has been taking place, as well as administratively it’s been taking place. So the direction, in which the current Indian state under Narendra Modi is transforming, is towards more centralisation and more Hinduization. That is the only transformational project that is taking place today. The march towards Hindu rashtra has already begun under Sangh Parivar.”

On the other hand, for New Delhi, there exist no Sikh aspirations. Branding it as a law and order problem, New Delhi founded police solution to otherwise political problem of Punjab. All talks of Indian leadership including present PM that only dialogue can end conflicts are farce meant to hoodwink civil society and divert international opinion about it. We believe that without a permanent solution to Punjab and Kashmir problems, there can be no lasting peace and harmony in this region.

* S. Kanwarpal Singh is official spokesperson of the Dal Khalsa. He may be reached at dalkhalsamail (at) gmail (dot) com.