The meeting with EU member parliament was arranged by the Sikh Federation (UK) in which Kuldip Singh Chaheru, Dabinderjit Singh of Sikh Federation and Advocate Harpal Singh Cheema, the working President of Dal Khalsa took part.

Notably, Advocate Cheema is on tour to Europe since last week to resurrect their organizational set-up in European countries in the wake of merger of Panch Pardani with the Dal Khalsa. 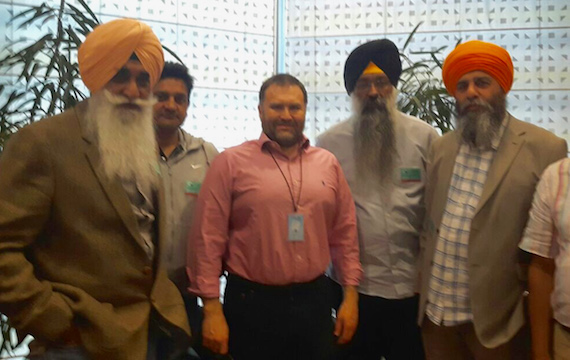 Sion Simon was told by the delegation that the BJP government led by Narendra Modi has created a climate of fear in the minds of the minorities and Dalits. From Sikhs to Christians to Muslims to Dalits- all were being told, loud and clear, “If you do not subscribe to the definition of “Nationalism” as coined by the Hindutva fanatics led by RSS, then you are anti-nationals”.

Other issues that were touched upon includes the denial of justice in the cases of November 1984 carnage, the hawkish approach of ruling party towards the dissenting forces in Punjab, the desecration of Sri Guru Granth Sahib, the incident at Bargari and denial of justice to two Sikh protesters killed in police firing at Bebhal Kalan beside the continued loot of water resources  by Central government violating the riparian principle.

Party spokesperson Kanwar Pal Singh told media here that their party president apprised the foreign dignitaries that “Punjab is the only state who’s more than 55 percent of the river waters were being diverted to non-riparian states like Rajasthan, Delhi and Haryana either under duress or due to chicanery of the Indian leadership”.

The delegation appreciated Sion Simon’s assistance at the European level in helping in the case of Parmjeet Singh Pamma who was prevented from being deported to India from Portugal where he travelled from the UK with his family for a holiday.