Hoshiarpur:  The pro-freedom party of the Sikhs, Dal Khalsa while sticking to the original version of Nanakshahi calendar adopted in 2003, released the copy of current year Samat 550. Its still a burning issue for the Sikhs as majority of Sikh institutions like SGPC, DSGMC and others adopted the Bikrami Calendar. 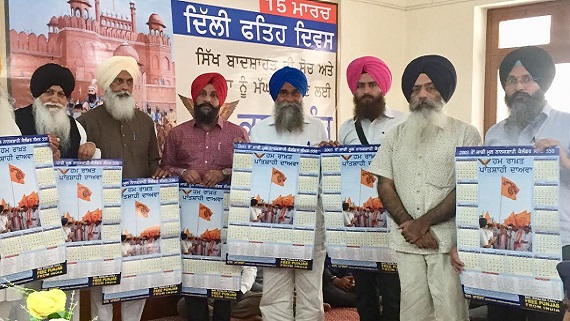 Dal Khalsa activists during the launch of Original Nanakshahi Calender.

Sikh Panth adopted its own Nanakshahi calendar on March 14, 2003 under the aegis of Shri Akal Takhat Sahib. After seven years, the Badal Akali Dal led by Badals forced Shri Akal Takhat Sahib’s SGPC backed Jathedar and SGPC itself to do amendments to appease Sant Samaj. Going further, in 2014, the calendar was reverted back to Bikrami and presently it is Nanakshahi by name only.

Terming SGPC as second fiddle of the Shiromani Akali Dal (Badal), the Dal Khalsa on Thursday criticized its successive heads for misleading the Sikh Diaspora on the issue of calendar and creating divisions among the Sikhs and that too to appease Sant Samaj.

Party leaders headed by H S Dhami released the copy at a function  held to pay its glowing tributes to Sikh warrior  of yesteryear Baba Baghel Singh, who is credited with the unfurling of Sikh Flag (Nishan Sahib) atop the Red Fort in 1783.  Sikh scholar Dr Sukhpreet Singh Udhoke was also present during the release ceremony.

Furthermore, party spokesperson Kanwar Pal Singh said the Nanakshahi Calendar was an identity marker for the Sikh community and the changes have killed the spirit of the almanac. He said these so-called changes in the Calendar have diluted the uniqueness of the Sikh almanac.

To commemorate the historic event popularly called as “Fateh Divas”, a convention was held  aiming to ignite the spirit of Sikh Sovereignty in the present generation and to connect them with their historical and cultural roots”, he said.

Dal Khalsa ex-head H S Dhami  while addressing the gathering explained the concept of Khalsa Raaj and ureged the youth to remain attached with their roots. He talked of unfinished agenda of Punjab’s Sovereignty to ensure safety and respect for all its citizens irrespective of religion.

SYP head Paramjit Singh Mand said the interests of Sikhs and Punjab were the sole concern of Baba Baghel Singh, while the focus of the present Sikh leadership was to mint money and enjoy power. We are passing through a critical phase and there was a need to re-strategize our plans to attain the Panthic objectives.