Kot Isse Khan,  Moga: As SIT in its charge-sheet has blamed former Punjab DGP Sukhbir Singh Badal and ex-DGP Sumedh Saini for their role in planning the beadbi incidents, the Dal Khalsa asked the Punjab government to take both of them in custody to unearth the deeper conspiracy behind the painful events that kept the Punjab on boil for three years.

Addressing the press meet, the party leaders sought arrest of Sukhbir Singh Badal and Sumedh Saini and interrogation of imprisoned Gurmeet Ram Rahim as the troika was responsible for hurting the religious sentiments of Sikhs, disturbing the peace of Punjab and killings two Sikh protesters. 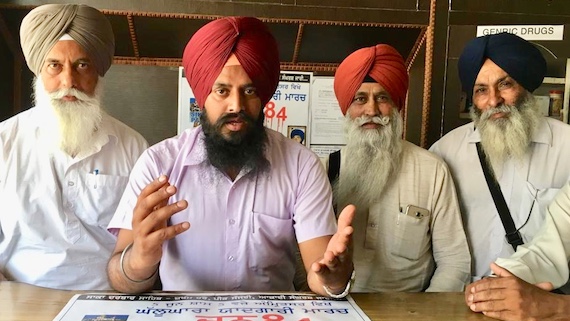 The Dal Khalsa leaders were in town to address the gathering of their workers to mobilize people for Genocide remembrance march on June 5 in Amritsar to mark the 35th anniversary Teeja Ghallughara (June 1984 attack by Indian Army on Dabar Sahib and other Sikh Gurdwaras in Punjab and adjoining states.

Party general secretary Paramjit Singh Tanda said notwithstanding the rise of Hindutva party at national level and Congress in Punjab in just concluded Lok Sabha elections, the wounds of the 1984 attack were still simmering and that the Sikhs has not forgotten the barbaric attack against Sikh faith.

On setting-up of SIT to probe custodial killing of Jaspal Singh of Faridkot, they demanded judicial inquiry by district session judge. They said the district police chief should be removed the post till the inquiry is completed. They said the custodial torture and deaths have been going on unabatedly and unashamedly since 80’s and political leadership remained helpless to stop it. They blamed impunity to the police force as a major reason for custodial killings.