Amritsar, Punjab: Sikh nationalist organizations, Dal Khalsa and Sikh Youth of Punjab, have launched a campaign to garner support for shutdown call for June 6, the 31st anniversary of ‘Ghallughara June 1984’.

“The shutdown has been called to protest against the sacrilege, the killing of innocent pilgrims, and loot of manuscripts from Sikh Reference Library,” said Dal Khalsa spokesperson, Kanwar Pal Singh told Sikh Siyasat News. 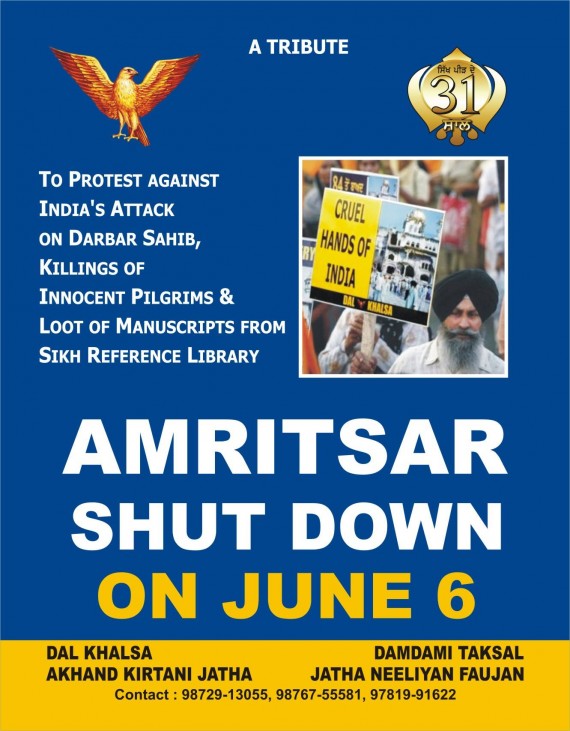 Amritsar Shut Down on 6 June

Sikh Youth of Punjab, a youth organization associated with the Dal Khalsa, has been campaigning for past few days in support of Amritsar shut-down call.

Activists of ‘Jatha Neeliyan Faujan’, led by its chief Harjinder Singh, also interacted with masses inside the Golden Temple premises, while members of the Sikh Youth of Punjab (SYP) led by Paramjit Singh roamed various localities urging the people to keep their business as well as educational institutions closed on June 6.

Kanwar Pal Singh, however, said medical stores would be allowed to remain open and added that the bandh would be peaceful and road and rail traffic will not be disrupted.

In a statement sent to the Sikh Siyasat News via email, the Dal Khalsa said that the shutdown call had the support of Damdami Taksal, the Akand Kirtani Jatha, United Akali Dal and Akali Dal Panch Pardani.