Chandigarh: Dal Khalsa today, slammed the Indian authorities for allegedly planting fictitious story in the media about Dabinderjit Singh Sidhu, who is a decorated personnel of the National Audit Office of the United Kingdom.

In a press conference the party president H S Cheema said that it was a deliberate attempt to malign Mr. Sidhu and stall the Labour party from considering and recommending the name of Sidhu for the House of Lords. The pro freedom group that works in coordination with Sikh Fedration (UK) on Sikh issues has taken steering exception over the news report that falsely portrays Sikh activist Dabinderjit Singh as a potential flashpoint in India-UK ties.

Dabinderjit singh Sidhu is an adviser to the Sikh Federation (UK) and India is inimical to the organisation and wants to paint a scary picture about him and his activism.

He further alleged that New Delhi was interfering into internal matters of UK and the Sikhs with a design to play mischief. 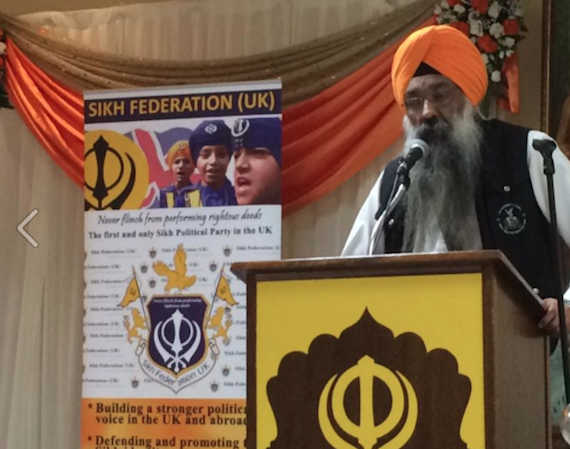 Taking a jibe at the allegations, Harpal Singh Cheema said India views every justice-seeker and freedom loving Sikh including Dabinderjit Sidhu, who speakes for right to self determination and rights violations in Punjab as highly provocative.

The Indian regime and intelligence agencies have imaginary fears about Dabinderjit Singh, who otherwise is a well-known devout Sikh working for the betterment and welfare of Sikh Diaspora. He said Dabinerjit Singh Sidhu was actively campaigning to press upon the present day UK government to investigate the role of then Prime Minister Margret Thachter in helping the India in carrying out the army attack on Darbar Sahib in 1984.  “This irks both India and British establishment”.

Moreover he said it appears that the Indian intelligence network was desperate having failed to discredit him directly with his employers, political class and the British Government.

It is in the fitness of thing to mention that nine years ago the Indian government under Dr Manmohan Singh wrote to the Canadian Prime Minister, Stephen Harper to try and prevent Dabinderjit Singh from visiting Canada.  In a serious rebuttal of the Indian position Stephen Harper publicly acknowledged in an official trip to India in 2012 that “merely advocating for Khalistan was not a crime”.