Jalandhar: Dal Khalsa today strongly condemned the Punjab government for arresting former general secretary SGPC Sukhdev Singh Bhaur under section 295-A and other provisions of Information Technology. The organization said it believes the arrest is patently motivated by other than legal reasons.

Party senior leaders H S Dhami and Kanwar Pal Singh said the govt acted in undue haste and under political pressure. They said Sukhdev SIngh Bhaur had regretted his remarks against the late head of Dera Bhallan and expressed apology for it. 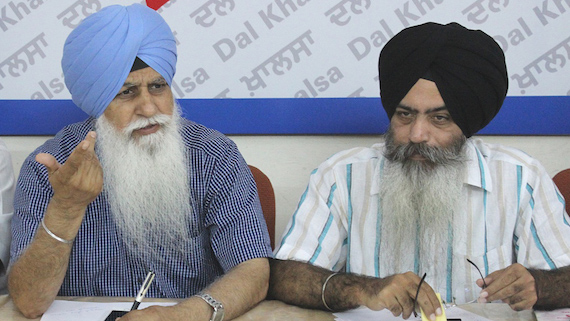 While detaining those who abuse Sikhs takes months and years, while the alacrity with which Sukhdev Singh Bhaur has been arrested, leaves no one in doubt that Congress government move was clearly intended to pander to the Dalit vote bank, they said.

They said parties with the interest of peace in Punjab and the inclusiveness of Sikhism at heart were attempting to resolve the issue through negotiation but political pressure of the Congress and the Shiromani Akali Dal (Badal) stalled the rapprochement move.

Popular grapevine is vocal that both the Congress and Badal Dal converged to put Bhaur behind bars. The Congress and SAD are running their politics on greed, lie and rhetoric said they and demanded that Bhaur should be released immediately and the politically motivated case should be withdrawn.

“Dal Khalsa also appeals to a section of Dalit brethren in Punjab not to fall prey to this kind of divisive politics and view this development in the right perspective”, said S. Harcharanjit Singh Dhammi.