Hoshiarpur: Dal Khalsa is holding a conference on 13 August in Chandigarh to celebrate 40 years of its committed journey to rekindle the spirit of sovereignty among the Sikh people through peaceful means and the right to self-determination.

Addressing the press conference party president Harpal Singh Cheema said their group will observe August 13 as Azaadi Sankalp Divas as “We feel history has been unkind to Sikhs. While Hindus got Hindustan (India), Muslims got Pakistan, but Sikhs missed the bus.”

He said the painful and bloody events of last seven decades leave no one in doubt that Sikh leaders made a mistake by agreeing to remain in India during Partition.

Elaborating about their party agenda, he said since inception their journey has been for the right to self-determination. In the present world scenario, self-determination has been a peaceful and political way to resolve conflicts.

The aspirations of the Diaspora for a Sovereign country are alive and kicking,” said former party head Harcharanjit Sindh Dhammi . He said in the conference they will spell out the true nature of sovereignty referendum under the aegis of the United Nations, leading to self-determination of the Sikhs and Punjabis. 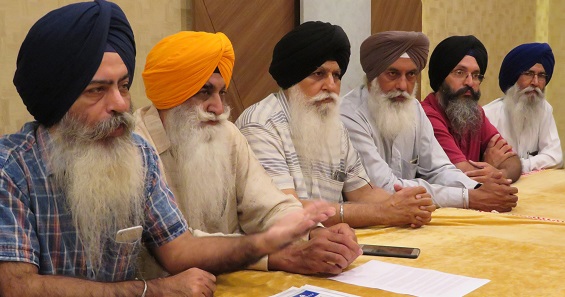 Dal Khalsa leaders at the press conference in Hoshiarpur

Party spokesperson Kanwar Pal Singh told the conference will re-evaluate our pitfalls in the past and the lessons we have learnt will be shared. He said while functioning as a political party in Punjab in the last 20 years, we have achieved a lot and equally, we have missed a lot. The balance-sheet of achievements and failures will also be placed before the audience to get feedback with the motive to streamline our functioning and build Dal Khalsa a stronger and more focused organization articulating the cause of Sikh Nationalism.

On Punjab Government handing over Behbal Kalan and Kotkapura firing case to CBI, the Dal Khalsa leaders said it’s the delaying tactics to ultimately deny justice. Where is the need to probe further and what’s there to probe? The case is clear like water. The govt lacked the willpower to catch the bull by its horns (referring to then DGP SS Saini). Arrest top cop Saini who gave orders and rest will follow, they demanded and added that compensation isn’t Justice.

Others who were present during press meet include Ranbir Singh, Paramjit Singh, Jasbir Singh Khandur, and Manjinder Singh Sohal.