Amritsar, Punjab: Dal Khalsa has decided to resurrect its party structure in Punjab, US, Canada, England and European countries.

“To give a new look to the organization, party leadership has resolved to focus on younger generation and enroll fresh blood in its rank and file. The organization reiterates its mission of complete independence from Indian yoke while adhering to democratic and political means” reads a press release issued today by the Dal Khalsa. 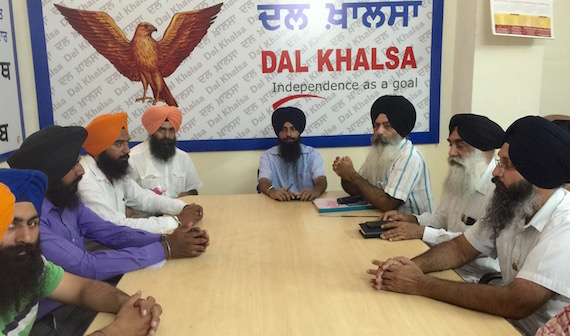 The decision to revamp and expand the party structure was taken at a meet of office bearers. Party spokesperson Kanwar Pal Singh said priority would be to enroll youngsters. Stressing that the communities future lay with young Sikhs, he said their thrust would be to groom new faces and bring forth talented youth through their platform.

He said the new set-up would be in place by August 13- the day theirs group would commemorate its 37th foundation day. He said the party structure would be finalized after the return of party president H S Dhami from US tour, who will be back in the end of this month.

Announcing his party plans after presiding over the meet, Kanwar Pal Singh said they would endeavor to reach out to the remotest village to set up organizational base. “We have a little base in Malwa region, so our focus would be to find foothold in that area.

Outlining the social-religio agenda, Dr Manjinder Singh said decline in quality education, drug menace and criminalization and commercialization of politics was some areas of serious concern that warrants urgent attention. Realizing the damage caused by drugs abuse and high consumption of alcohol, he said the forces and elements that drugged the Punjab were the same who were now raising false hue and cry on the matter. Taking the SGPC to task for failing the community on many fronts, he said the continuation of raising of structure that lookalike Darbar Sahib at Mastuana in Sangrur district was SGPC’s biggest failure despite that fact that on June 21, 2009 at Sikh conclave, the entire Sikh institutions and groups has given the mandate to SGPC to raze the (Golden Temple) replica. Few days back, the SGPC in its executive meet has formed five member committee to look into the matter. The meeting took strong note of indifferent and non-serious approach of the Union and state Government’s towards the release of political prisoners issue.