Amritsar: Observing that the credibility and authority of Sikh institutions, including SGPC, have been undermined and compromised due to the dabbling of corrupt politics of SAD (Badal), the Dal Khalsa expressed serious concern over the lingering animosity between Damdami Taksal and Ranjit Singh Dhadrianwala and unresolved Nanakshahi calendar issue.

Party general secretary Paramjit Singh Tanda urged Prof Kirpal Singh Badungar to break his silence and work to bring both the warring factions on table to resolve their differences and end uncertainty over calendar by implementing the original version of 2003. “Leaving the matter to disgraced jathedar Gaini Gurbachan Singh will lead to nowhere as his position stands exposed in the Panthic circle”.

Notably, the meeting of five Takhat Jathedar is scheduled for tomorrow in which both these issues would be discussed.

After presiding over the meeting of youth members, Paramjit said better sense has prevailed and Dhadrianwala has voluntarily cancelled the proposed ‘gurmat’ samagam to avoid any untoward clash. 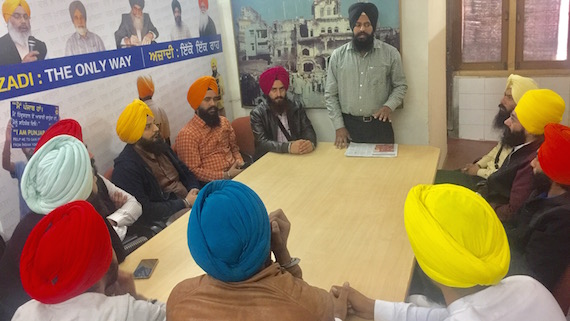 Dal Khalsa general secretary Paramjit Singh Tanda urged Prof Kirpal Singh Badungar to break his silence and work to bring both the warring factions on table to resolve their differences and end uncertainty over calendar by implementing the original version of 2003 | Photo: Sikh Siyasat News

For us, neither of them are anti-Panthic. However, we are upset over the venom their followers spew against each other on social media, which is adversely affecting the youth, said he. The young members cautioned Dhadrianwala not to speak out of anger against his ideological opponents during his religious discourses.

He said theirs party sticks to original calendar adopted in April 2003 and strongly rejects the tampering of Nanakshahi and reverting to Bikrami calendar by SGPC under pressure from Nanaksar samparda via Badals.

The meeting observed that the challenges before the community are multi-dimensional. “To resolve the maryada differences, there’s need to come out of parochial mindset, build a cordial environment for mutual understanding and for that matter the SGPC should take the initiative, said SYP head Paramjit Singh Mand.