New Delhi: State governments must ensure that Dalit protestors are not denied their rights to peaceful assembly and freedom of expression, Amnesty International India said today. State police must not detain anyone simply for claiming their rights, and must bring to justice those responsible for attacking peaceful Dalit protestors.

On 18 February, Jignesh Mevani, a Dalit activist and member of the Gujarat legislative assembly, was stopped by the Gujarat state police from attending a protest over Dalit land rights. He was pulled out of his car and detained for several hours by the police, who he said also broke his car keys.

Jignesh Mevani was on his way to join Dalit activists protesting the death of Dalit activist Bhanu Vankar. Vankar died of burn injuries on 16 February after he immolated himself in front of a government office in Patan, Gujarat, protesting delays by the state government in allotting land to Dalit families. Several protests, some of them violent, have since broken out across Gujarat. Dozens of protestors have been detained.

“Gujarat authorities have a duty to maintain public order, but they must ensure that peaceful Dalit protestors can have their voices heard,” said Asmita Basu, Programmes Director at Amnesty International India.

“Recent years have seen a welcome upsurge of Dalit women and men challenging violence and discrimination and claiming their constitutional rights. But instead of addressing these concerns, authorities have often either tried to stamp out protests, or looked away when Dalit protestors are attacked by others.” 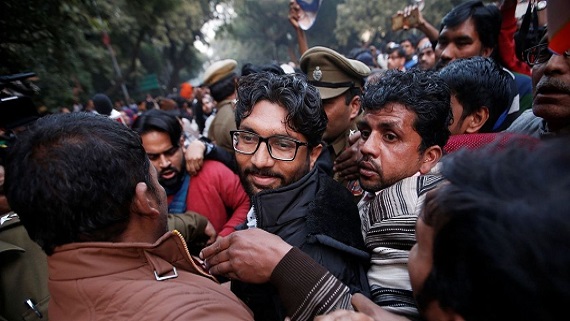 In November 2017, the Uttar Pradesh police arrested Chandrashekhar Azad ‘Ravan’, a Dalit rights activist, and held him in administrative detention under the National Security Act, a day after he was granted bail by the Allahabad High Court. Azad was arrested in June 2017 for offences including alleged rioting, following clashes between protesting Dalits and dominant caste groups over the killing of two Dalit men and the burning of at least 50 Dalit homes in Saharanpur, Uttar Pradesh. Administrative detention circumvents the human rights safeguards of ordinary criminal procedure, and undermines the rule of law.

On 1 January, Dalits who had gathered in Bhima Koregaon, Maharashtra, for a festival to commemorate a battle where Dalits helped defeat a dominant caste ruler were allegedly attacked by members of hardline Hindu groups. A committee comprising Dalit activists which was led by the deputy mayor of Pune and set up by the Pune police to look into the attacks said that the police had prior knowledge that Dalit protestors would be assaulted, but did not take any preventive measures.

The state police have rejected the committee’s findings. Protests – some of them violent – subsequently broke out across Maharashtra following the violence in Bhima-Koregaon. On 3 January, Yogesh Jadhav, a 16-year-old, was killed in Nanded during a baton-charge by police personnel. His father said he had been struck on the head, while police personnel said Jadhav died after being trampled by fleeing protesters.

Kancha Ilaiah Shepherd, a writer and Dalit activist, who has been targeted for his work, said, “The state has shown no intent in ending caste discrimination and untouchability. That’s why, instead of listening to what the Dalit activists and protestors have to say, they are arresting and denying them the right to protest.”

“Stifling peaceful protests and blocking Dalits from claiming their rights will only undermine the legitimacy of state governments in the eyes of their people. Authorities need to instead send a clear message that abuses against Dalits will never be tolerated,” said Asmita Basu.