Dalit Student of Law Beaten to Death in Uttar Pradesh (UP)

Uttar Pradesh: A 26-year-old Dalit student, who had slipped into coma after a group of students attacked him with bricks and rods at a restaurant near Laxmi Talkies in Old Katra area of the city last week, died on Sunday.

The police lodged an FIR against six people, and the main accused, Munna Chauhan, was arrested after being identified from the CCTV footage obtained from the restaurant.

SP (City) Siddharth said the deceased was identified as Dilip Saroj, who belonged to Pratapgarh. Saroj was pursuing LLB form Allahabad Degree College and lived at a rented room in Om Gayatri Nagar. 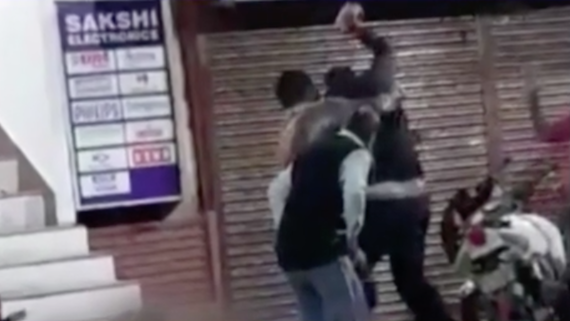 Dalit Students of Law Beaten to Death in Uttar Pradesh (UP)

On Friday night, Saroj’s friend Sameer had thrown a party at a restaurant after he purchased a two-wheeler. Saroj, Sameer and two other friends Prakash and Siddharth had ordered food and were sitting on the stairs of the restaurant when Vijay Shankar Singh and his friends came for dinner, the police said.

When they were climbing the stairs, Singh’s feet reportedly touched Saroj. The latter objected to it and an altercation began. Soon, it led to exchange of blows the two groups started throwing chairs on each other. One of the flying chairs hit a waiter, Munna Chauhan. An enraged Chauhan then hit Saroj with a rod, the police said.

Inspector of Colonelganj police station Awadesh Pratap Singh said, “As per the CCTV footage obtained from the restaurant, they attacked Saroj mercilessly in the restaurant. He tried to flee but fell unconscious outside the restaurant. The accused, however, continued to hit him with rods and bricks in his head and body.”

‘SC-ST Act yet to be included in FIR’

An FIR was lodged against Singh and his friend under Sections 323 (voluntarily causing hurt), 307 (attempt to murder) and 308 (attempt to commit culpable homicide) of IPC.

“The SC-ST Act, however, is yet to be included in the FIR,” said a police officer.

When attackers left the scene, the restaurant owner, Amit Upadhyay, with the help of others got Saroj admitted to Swarooprani Nehru Hospital. Soon he was shifted to a hospital where doctors declared him “brain dead”.

On Saturday, Saroj brother, a PCS officer posted at Rae Bareli, shifted him to a private hospital where he died of his injuries.